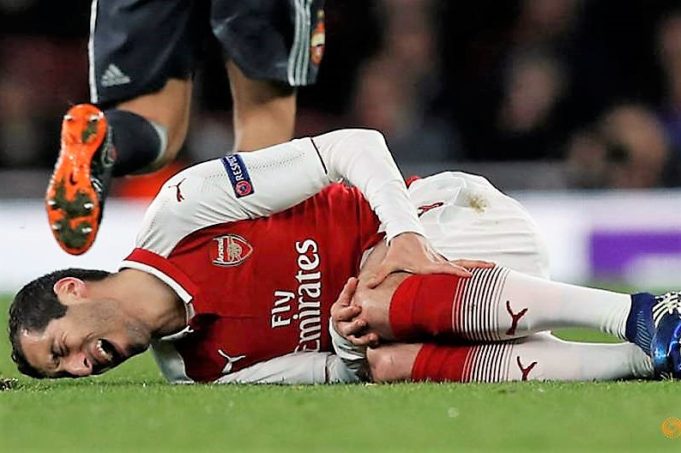 Despite an amazing performance from Gunners last night, they have been made to step down a little in their celebration mood as one of their key player was withdrawn during the game after picking up a knock.

Henry Mkhitaryan who has so far enjoyed an interesting start to his career at the Emirates since he joined in a swap deal that saw Alexis Sanchez move to Old Trafford was withdrawn from the game that saw Arsenal trump CSKA 4-1 in the 60th minute with what seemed like a knee injury.

The Armenian who got the player of the month award in February and a nomination in March is starting to flourish both in Europe and the Premier League following his conversion to a more attacking role than he was enjoying at the Old Trafford.

Mkhitaryan clashed knees in what seemed like a dangerous challenge with a CSKA player and was moved out of the pitch, although no information has been confirmed on the extent of the injury.

Arsenal will be looking to have him back as they push for a fifth place finish in the Premier League.

While Mkhitaryan’s injury was certainly a big blow for the Arsenal side, it did not in anyway undermine the performance of the gunners in the match that saw them open a 4-1 lead against an underperforming CSKA Moscow side that were a shadow of the giants they are in Russia.

Aaron Ramsey saw the back of the net twice while Alexandre Lacazette also got himself a brace to hand Arsenal a convincing win and an early advantage into next week’s return leg in Russia.

In a related development, the Gunner’s medical officials have reported that the injury second choice goalkeeper, David Ospina picked during training is not as bad as was first feared.

The ankle problem will keep the Arsenal goal stopper on the sidelines for three weeks, while his condition will be closely monitored by the medical team and as always platforms like scr888 has got enough information to keep you occupied on this.

Having bounced back strongly from an unimpressive run of four consecutive defeats by winning five straight matches, The Gunners will be having their sights on maintaining their strong recent form when they play host to a Southampton team that has not been so amazing in their recent away form this Sunday.

has published a new post."Five Spots Amari Cooper Could Land in Free Agency"
5 hours ago

has published a new post."Double Hattrick or Six-peat?"
14 hours ago