Jurgen Klopp’s men have gone from strength to strength since the start of 2022, and are now only one point behind the champions Manchester City in the table. But can Liverpool actually go on to achieve an unprecedented quadruple of trophies in a single season?

Well, looking at the way they’re playing and how they are getting the wins under their belt, it’s certainly a real possibility as Klopp and his players look to achieve everything they can in the final stretch of the season.

At the start of the year, following a thrilling 2-2 against Chelsea at Stamford Bridge, Liverpool were 14 points behind league leaders Manchester City and many considered the Premier League title race over in January as Pep Guardiola’s men looked to achieve a 4th title win in 4 years.

But fast forward to March, and after drawing to the likes of Southampton and Crystal Palace, as well as losing to Antonio Conte’s Tottenham Hotspur, Liverpool were able to capitalise and pick up 27 points since early January to see themselves just one point behind Guardiola’s Manchester City side, with the teams still having to play each other in April.

Having already secured 1/4 trophies this season with their League Cup victory over Chelsea in late February, The Reds made a clear statement that they are gunning for all the marbles and have shown the rest of the world they have the capabilities to compete across all fronts this campaign.

Klopp’s biggest concern for January was the departures of Mohamed Salah and Sadio Mane to the African Cup of Nations, with both players reaching the final for Egypt and Senegal respectively. Questions were going to be raised over who was providing the firepower needed to sustain a title charge this season. But that’s where the rest of the team came in, with Diogo Jota, in particular, stepping up in their League cup semi-final second leg clash against Arsenal to secure their place in the final against Chelsea.

January Singing Luis Diaz has been a revelation since joining Liverpool, scoring two goals in the league and looking like a serious threat to the opposition whenever he gets on the ball. Considering how interchangeable Liverpool’s front three are on the attack, Daiz seems to have fitted well into Klopp’s system thus far and is displaying the qualities of a top player that will become vital for the Reds in the final part of the season.

One of the trophies the Reds are fighting for is the FA Cup. Having defeated Nottingham Forest 1-0 before the international break, even though the home side were much more dominant in the game, Liverpool fight, determination and most importantly quality to see out Forest and show what Champions can be made of. Klopp’s men face Manchester City in the semi-final taking place in mid-April, the fate of this game could have huge consequences on the title race as Pep Guardiola will want to win all of the remaining trophies available to snatch them away from his greatest managerial rivals.

In Regards to their Champions League campaign, having topped their group with 18 points that featured the likes of AC Milan, Athletico Madrid and Diaz’s former side FC Porto, they were drawn in the last 16 to Italian Champions Inter Milan. Despite being dominated in certain areas of both matches, Klopp’s men came out 2-1 victors over the two-legged affair and now have a favourable quarter-final clash against Portuguese outfit Benfica. Victory in Portugal sees them play Bayern Munich in the semi-final, a team who they’ve already beaten in the knockout stages before during their 2019 Champions League triumph.

During an interview in early March, Klopp played down talk of Liverpool winning a ‘crazy’ quadruple, saying “No team in the history of English football ever won the quadruple, right? Because it’s really difficult,” Klopp said. “We are not even close to thinking about crazy stuff like that. We have won the Carabao Cup, we are behind City in the league and now we have Norwich in the FA Cup after 120 minutes on Sunday. Even Manchester City with all their quality did not win it. The reality is [that] to win something you have to be focused on the next step and the one after that – that’s what we do.

“I don’t see it as a compliment [if people think they can] but it’s better people think we can do good things rather than be useless. I don’t need this kind of compliment – we are close to nothing at the moment. We face a lot of good teams between now and the end of May. The smallest problem I have right now is thinking they [players] could fly.”

The Liverpool manager is obviously being cautious about the idea, as he naturally would, but given the excitement Reds fans are feeling as we approach the end of the 2021/22 season, even Klopp must feel there is a real chance that he and his players can achieve history this season and win the quadruple, something that not even Pep Guardiola, Arsene Wenger or Sir Alex Ferguson have ever done. 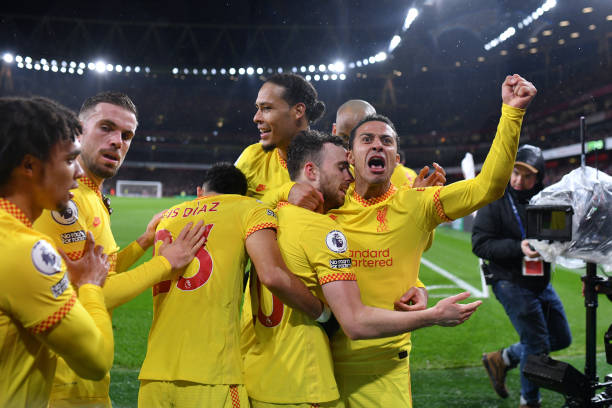