All 16 of the NRL clubs returned in Round 14 following the first game of State of Origin. But with some players from the game being rested for the week, the clubs affected most by Origin’s disruption still had challenges to overcome without key players.

Some clubs handled the effects well as the Sea Eagles and Storm dealt heavy defeats to their respective opponents. Others weren’t so lucky as the Roosters barely hung on for their win while the Panthers were handed their second straight loss.

Sea Eagles captain Daly Cherry-Evans came into their game against North Queensland less than 48 hours after leading Queensland in their horror State of Origin drubbing. And when the Cowboys scored twice on the first seven minutes, another blowout loomed.

But DCE rallied his troops and guided them to not only a remarkable turnaround but a massive load of points against the Cowboys. Reuben Garrick also had a starring role as fullback in Tom Trbojevic’s absence – his performance included a solo try in which he ran the full length of the field. Almost every Sea Eagle had a strong hand in blowing the Cowboys off the park, particularly through the middle.

The match was also notably the Sea Eagles’ tribute to late legend Bob Fulton. Manly played out the match in heritage jerseys adorned with their logo from the 60’s and 70’s.

After the run of success they’d had, the State of Origin period was always going to be tough on the Chocolate Soldiers. With all but one of Penrith’s six Origin stars rested this week, the Panthers struggled early against the Sharks.

Cronulla recorded three straight tries before half time, directed by the halves Matt Moylan and Shaun Johnson. But a head knock to captain Wade Graham took some gloss off the dominant performance. The second half saw Matt Burton inspire a comeback from the Panthers to even up the scores with five minutes left. Johnson stepped up to secure the win for Cronulla with a wobbly field goal in the dying minutes.

Penrith’s points buffer on the ladder has now disappeared after two defeats on the trot. Most, if not all of their rested players should return next week against the Roosters, giving them a chance to return to the winners’ circle before Origin Game II.

The Sydney Roosters were on track for a massive win over the Gold Coast Titans. Their youngsters were poised in attack and Jared Warea-Hargreaves had an outstanding defensive performance, sending them to a 30-4 lead at one state.

With half an hour to go, Sydney’s fortunes changed dramatically. Ben Marschke went to the sin bin for high contact and the Titans scored three in the next ten minutes. Kevin Proctor brought Gold Coast into the lead when he dived on a grubber kick from Jamal Fogarty. But Matt Ikuvalu scored an equaliser for the Chooks and Fogarty dropped the ball to snuff the Titans’ chance at a field goal.

Sam Walker ensured the Chooks survived the scare with the first field goal of his career.

Both South Sydney and Newcastle were far from at their best, with the former’s Latrell Mitchell feeling the fatigue so soon after performing in Origin. But it was Newcastle who disappointed in a continuation of their recent sluggish form.

Newcastle’s Dominic Young scored his maiden try to open the Knights’ efforts but Alex Johnston was the big name for Souths that evening. The red hot winger dominated down the left edge for his second hat trick in as many matches. Jaydyn Su’A also chipped in with a try after giving the ball a soccer-style kick into the in-goal.

The Bunnies will have an easy run through the remainder of the Origin period with matches against Brisbane, Wests, North Queensland and Canterbury coming up.

It had been 4,277 days since Karmichael Hunt’s last NRL match, as the Brisbane Broncos regularly reminded us in the lead-up to his high-profile return against the Raiders. Hunt became Brisbane’s sixth halves player this season after signing with one of their feeder clubs earlier in the year.

His first game back didn’t live up to the hype – he had a quiet performance outside of a few runs with the ball and a single handling error. Other Broncos players had it worse, with Kobe Hetherington sent off for a shoulder charge on Corey Harawira-Naera in the 60th minute. By then the Raiders had dashed out to an imposing 32-10 lead. And Canberra’s second-half hoodoo didn’t return to haunt them with just a try apiece afterward.

The bye can’t come soon enough for Brisbane. They will play the Rabbitohs and Sharks before they get their breather for the season.

The New Zealand Warriors held their Great Big Kiwi Coast Party on the Central Coast in the lead-up to their match against Melbourne, featuring Kiwi rock band Dragon and a poignant Haka performance. The occasion came just days after the announcement that they would take a home game back to Auckland after nearly two years away from their spiritual home.

The event spurred the Warriors to a valiant early performance in keeping the first twenty minutes down to a penalty goal each. But the Storm soon took control, kick-started by home-grown talent Dean Ieremia in the right corner. Josh Addo-Carr and Harry Grant backed up from Origin with a try each, but Cameron Munster landed in hot water for what appeared to be a light kick at Roger Tuivasa-Sheck, a similar incident to one he was lucky to get away with in Origin. Ken Maumalo was the Warriors’ only tryscorer, with a hat trick in his final game for the club before moving to Wests Tigers.

The Warriors have fallen further from the top eight but can wrestle their way back into the mix with fellow strugglers the Knights and Dragons up next.

The face-off between Parramatta and Wests Tigers saw a return of the high rate of sin-binning that had controversially cropped up in rounds 10 and 11. The Eels’ Maika Sivo and Isaiah Papali’i and Wests’ Shawn Blore were sent off for ten minutes each for respective cases of contact against an opponent’s head.

Blore’s departure was the catalyst for Parra’s onslaught as the Eels crossed the line three times in the first ten minutes of the second half. The stunning performance from Mitch Moses helped make up for a modest half-time lead of 14-6, which would have been a much wider gap were it not for small mistakes in try attempts picked up by the Bunker. Clint Gutherson bookended the performance with tries on either side of the goalposts.

Canterbury-Bankstown were surprisingly strong against the St. George Illawarra Dragons. Only some impressive early try savers kept Canterbury’s lead within reach to start.

However the Bulldogs continued to hammer at the Dragons until they finally cracked. St. George conceded eight set restarts and while the Dogs didn’t always handle the ball well, they had more than enough of it to deal plenty of damage. Jake Averillo scored Canterbury’s first two tries and kicked three penalty goals in a proud showing for the young gun. They weren’t perfect – repeated infringements resulted in Josh Jackson going to the sin bin – but the Dragons’ lacklustre attack and defence ensured it was of little concern.

Their second win of the season and earlier brave performances have Canterbury looking up, even while they must face off against strong top eight sides in their next four games. 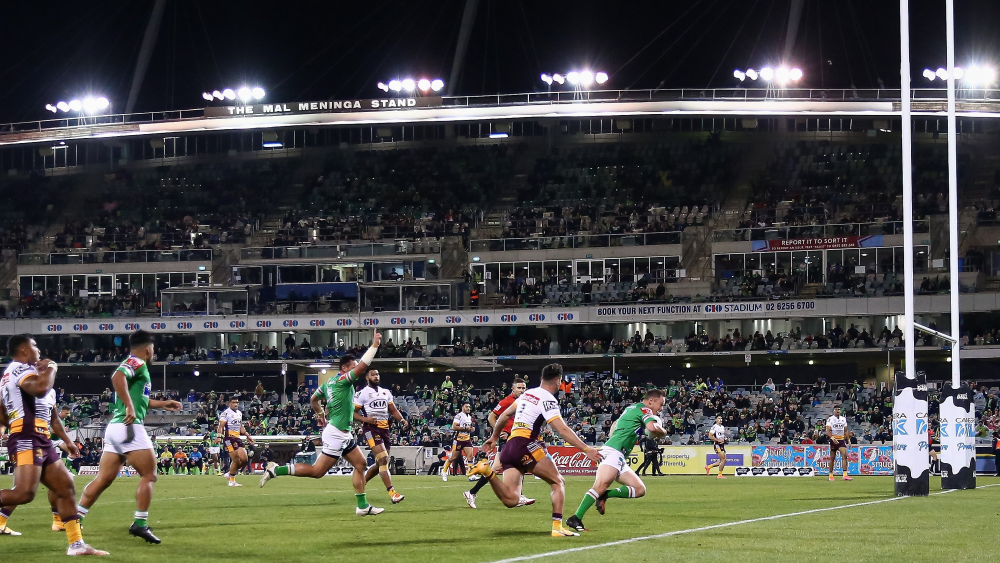