Jimmy Butler and Bam Adebayo got Miami with a basket each, while Nerlens Noel made the first seven points for Oklahoma City. After a three-pointer each from Duncan Robinson and Danilo Gallinari for the Heat and the Thunder respectively, Miami went on an eleven to nothing run. Chris Paul and Shai Gilgeous-Alexander ended the run with a three-point play each for the Thunder. The Heat responded with three-pointers of their own from rookie Kendrick Nunn and Goran Dragic. After a three-pointer from Gallinari and a basket from Paul for Oklahoma City, Adebayo made a pair of baskets, giving Miami a 28 to 21 lead. Miami ended the first quarter on a twelve to five run, giving them a 40 to 26 lead. The 40 points would be the most Miami has scored in the first quarter since the 3rd of November.

Rookie Darius Bazley and Hamadou Diallo picked up the offense for Oklahoma City heading into the second quarter, while Kelly Olynyk and Derrick Jones Jr. would do the same for Miami. After a three-pointer from Mike Muscala for Oklahoma City, Miami led 44 to 36. Jones Jr. would make a free throw for Miami, but a duo of fouls on the Heat would send Gallinari and Dennis Schroder to the line for the Thunder, making a combined tally of three free throws. After a three-pointer from Nunn, Miami led 48 to 39. The Heat ended the second quarter on a thirteen to six run, giving them a 61 to 47 lead.

The three-pointers were falling for Oklahoma City in the third quarter as Schroder and Gallinari knocked down a few, while Nunn, Adebayo, and Meyers Leonard picked up the offense for Miami. After Butler made a technical free throw, the Heat were on a nine to two run. Gallinari ended the run for Oklahoma City with a three-pointer, followed by a basket from Paul. Miami responded with a floater and a layup from Nunn. With Miami leading 76 to 63, the three-pointers continue to fall as Leonard made one for Miami, while Muscala and Gallinari made one each for the Thunder. After a breakaway layup from Diallo, the Heat led 82 to 71. Miami ended the third quarter on a ten to seven run, giving them a 92 to 78 lead.

As the fourth quarter commenced, Olynyk and Dragic took over on the offense for Miami, while Schroder knocked down a basket and a three-pointer. With Miami leading 99 to 83, Olynyk made a layup, followed by a four-point play from Jones Jr., while Gallinari and Noel made a three-point play each for Oklahoma City. With the Heat ahead 105 to 89, the Thunder went on a twenty-two to seven run, led by Paul and Gallinari. Butler ended the run with a layup, followed by a free throw from Adebayo. Miami would go on to win 115 to 108.

After getting a victory on their home court, the Heat gained a much needed victory on the road. Miami looked sharp and impressive throughout the contest, including staving off a late game rally from Oklahoma City. Miami shot 48.8 from the field, 79.2 percent from the free throw line and 38.9 percent from three-point land. Miami are now 23 – 2 when taking a lead into the fourth quarter, a very impressive stat record.

For the Heat, Kendrick Nunn had 22 points, Bam Adebayo with 21 points, Duncan Robinson made 14 points, Derrick Jones Jr. had 13 points, Kelly Olynyk with 12 points, Goran Dragic made 10 points, and Jimmy Butler with a double-double of 14 points and 10 rebounds.

For the Thunder, Danillo Gallinari led the way with 27 points, Shai Gilgeous-Alexander and Dennis Schroder had 18 points each. Chris Paul made 14 points, Hamadou Diallo with 11 points, and Nerlens Noel had 10 points.

The Heat continue their road trip with a rematch against the San Antonio Spurs on Sunday. Game starts at 3pm and televised on Sun Sports. 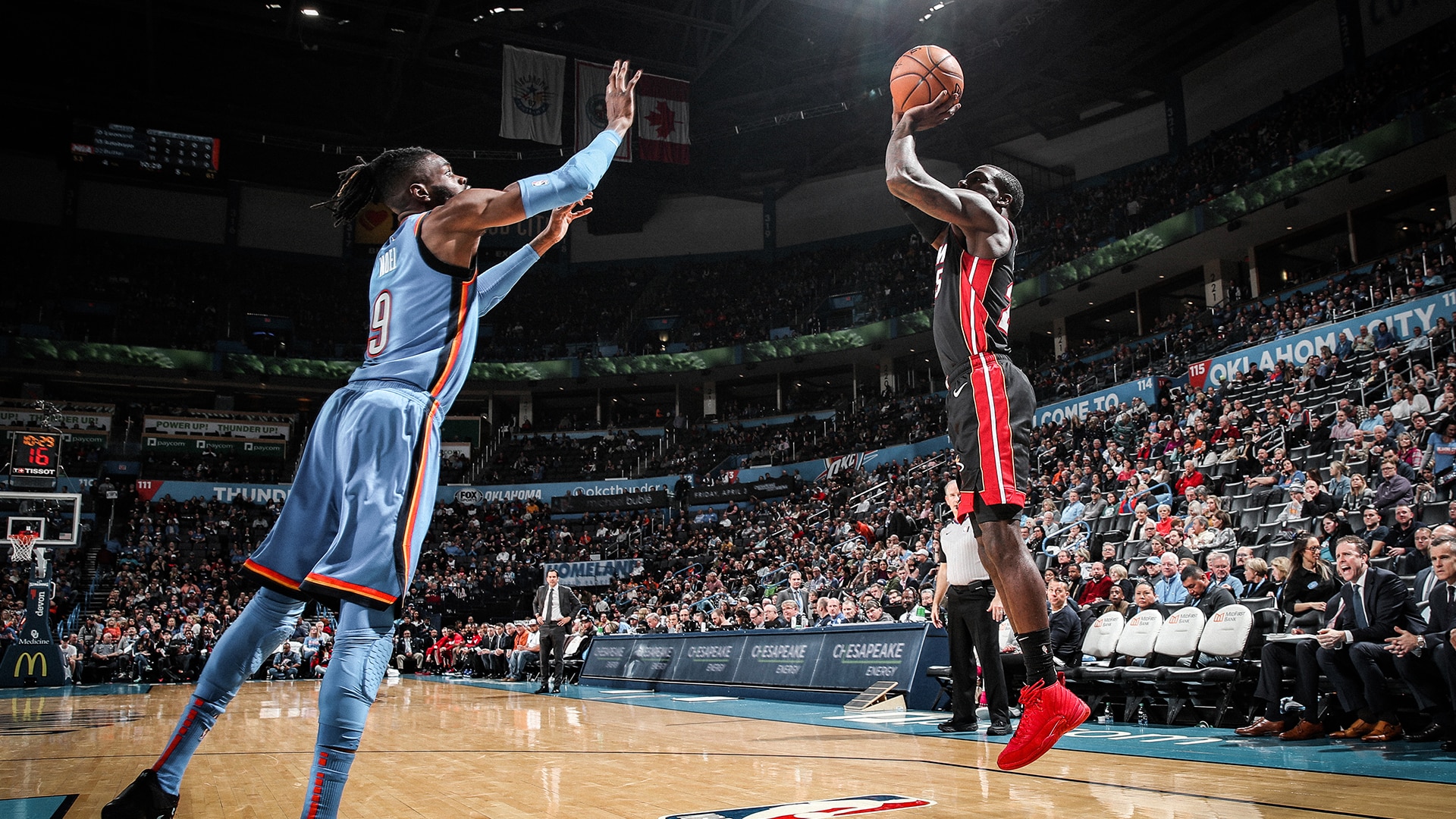