It was another fantastic day for Arsenal as they secured victory at the Molineux whilst Manchester City dropped points against Brentford thanks to a brace from Ivan Toney.

The pressure was also increased for both Graham Potter and Frank Lampard as Chelsea and Everton both suffered away defeats to Newcastle United and Bournemouth respectively.

Ivan Toney’s two goals against Manchester City demonstrated exactly why so many fans were desperate for Gareth Southgate to include the striker in his 26-man squad for the World Cup.

Despite having the home crowd behind them, Pep Guardiola’s men started the match sluggishly, and The Bees took full advantage. Using their unique blend of technical ability and physical strength, Thomas Frank’s side were able to impose themselves on the home team, and their opening goal was fully deserved.

As expected, the early goal did not phase City, and the Sky Blues continued to push for an equalizer. Brentford were doing an incredible job at limiting the number of clear-cut chances the reigning champions of England could create. However, on the stroke of half-time, Phil Foden superbly smashed home a half-volley from inside the box to ensure the hosts were level at the break.

The second half was more of the same – Man City continued to push for the winner, and Brentford continued to look incredibly dangerous on the counter. The Manchester club could not find that goal, and they were eventually punished when Ivan Toney scored his second of the match, his tenth Premier League goal of the season, in the 98th minute to seal a late 2-1 victory for The Bees.

The result means that Manchester City remain two points behind the Gunners at the summit of the table, whilst Brentford climb to eleventh.

The pressure continues to mount for Frank Lampard as the Everton boss saw his side succumb to a 3-0 defeat at the Vitality Stadium.

Bournemouth did not dominate the game, certainly not in terms of possession at least, with The Toffees registering 63% possession across the match. However, first-half goals from Marcus Tavernier and Kieffer Moore ensured that the home side got off to a flying start, with the Cherries 2-0 up at the interval.

The game continued in a similar vein in the second period; with Everton continuing to control the ball without creating any real clear-cut goalscoring opportunities. Jaidon Anthony’s goal in the 68th minute put the result beyond any doubt, with Bournemouth out of sight and three goals to the good.

The victory means that Bournemouth have put an end to their run of four consecutive defeats in the Premier League, and are up to thirteenth, whilst a second defeat on the spin for Frank Lampard’s Everton sees The Toffees fall to seventeenth.

Liverpool secured their second consecutive win in the league with a 3-1 victory over Southampton, and, rather bizarrely, all four goals were scored in the first half.

Roberto Firmino fired The Reds ahead in the sixth minute of the game, shining yet more spotlight on Brazil manager Tite’s controversial decision to omit the forward from his 26-man squad for the Qatar World Cup. However, they were unable to hold onto their lead, and just moments later, Che Adams scored the equalizer for The Saints.

Two goals from Darwin Nunez, in the 21st and 42nd minute respectively, then restored the hosts lead and ensured that Jurgen Klopp’s side went in at halftime in full control of the game.

Don’t be fooled though, this display was not vintage Liverpool by any stretch of the imagination.

Whilst they created plenty of chances of their own, and on another day, would have put the game to bed, Liverpool still needed Alisson to produce a string of impressive saves at the other end of the pitch in order to preserve their 3-1 lead.

Ultimately though, Klopp’s men got the job done and now move into sixth place, five points adrift of the top four. On the other hand, Southampton’s third defeat in as many games sees The Saints fall to nineteenth in the table.

Nottingham Forest edged a narrow 1-0 victory against Crystal Palace in a game that never looked like producing a hatful of goals given that the pair have scored just 26 Premier League goals between them this season.

It was an entertaining game of football though, with the crowd, and those watching at home treated to a combined 17 shots on target, but the lack of killer instinct in the final third was apparent in abundance for both sides.

As they have done throughout the start to this campaign, Patrick Vieira’s side played fantastic football and dominated possession, but it was the home side that took the lead through Morgan Gibbs-White’s 54th-minute strike – which turned out to be the winning goal of the game.

It was a crucial victory for Nottingham Forest, whose upturn in form now means that they head into the break just one point adrift of safety. Crystal Palace missed the chance to move back into the top half of the table, and remain in eleventh.

Wow, what a game for the neutral. They were made to come from behind on three separate occasions, but eventually, Tottenham edged out Leeds in this seven-goal thriller.

Leeds initially took the lead after just ten minutes when Crysencio Summerville opened the scoring to continue his fine form in front of goal. However, in what became a common occurrence during the match, Tottenham pegged the away side back, courtesy of another Harry Kane strike to level the game before Rodrygo Leeds back ahead moments before the halftime whistle sounded.

Spurs’ tendency to fly out of the blocks in the second half continued, and Ben Davies levelled for the home side for the second time in the 51st minute, only for his team to fall behind once again as Rodrygo bagged his second goal of the game in the 76th minute

Pure elation quickly turned to heart-break for the Leeds United fans though, as two quickfire goals from Rodrigo Bentancur secured the victory for Antonio Conte’s side, who close the gap to second-placed Manchester City to just three points.

Jesse March will be furious with his players’ inability to keep the ball out of their own net, and the defeat sees Leeds slip to fourteenth.

Leicester continued their resurgent form after their slow start to the season, securing a 2-0 victory away at The London Stadium.

James Maddison set the tone for his side at the start of the game, firing home in the eighth minute to put The Foxes 1-0 up. However, just seventeen minutes later, there was a heart-in-mouth moment for Leicester and England fans alike, as Maddison was forced off the pitch with an injury – 48 hours after receiving his call-up to the England World Cup squad.

Thankfully though, Brendan Rodgers confirmed after the game that the midfielder’s substitution was purely precautionary and Leicester “didn’t want to risk anything for him.”

The Hammers will be disappointed that they were unable to get back in the game, having directed a total of 18 shots at Danny Ward’s goal, but David Moyes’ side failed to find the back of the net, and Harvey Barnes’ strike, following a mesmerising run from Ayoze Perez, sealed the three points for Leicester City.

The win means that Brendan Rodgers has now successfully steered the side away from the relegation zone, with The Foxes up to twelfth, whilst West Ham United remain worryingly close to the danger zone in fifteenth.

ALSO READ:  A Player From EVERY Premier League Club That Has Exceeded Expectations So Far This Season – Part Two

Newcastle were the better team throughout as Chelsea struggled time and again to effectively progress the ball up the pitch. Miguel Almiron was excellent from start to finish, and the Paraguayan played a critical role in the Newcastle winner, heading the ball around Kalidou Koulibaly before ex-Arsenal man Joe Willock smashed the oncoming ball home from outside the box.

The Blues did eventually click into gear, showcasing some impressive attacking fluidity towards the latter stages of the game, but The Magpies stood firm and defended their goal brilliantly. Frustration began to grow among the Chelsea players, which quickly escalated into multiple brawls taking place in stoppage time.

Despite that, the Newcastle players were able to regain their composure and hold on to secure their fourth straight victory in the league, which sees them retain fourth spot. Whereas for Chelsea, the defeat further intensifies the pressure already on Graham Potter, with The Blues now in eighth, one place behind his former club Brighton and Hove Albion.

Read More: Is Nathan Jones the right man for Southampton?

They weren’t at their brilliant best, but Mikel Arteta’s side found a way to grind out such an important victory.

The Gunners were hampered early on in the first half when Granit Xhaka was forced off the field due to an injury, with summer signing Fabio Vieira replacing the Swiss international. Given that Xhaka has become an integral part of the way this Arsenal team plays, his absence perhaps goes some way to explaining the lack of fluidity in the Gunners’ attacks, particularly in the first half.

Wolves gave as good as they got, with Adama Traore terrorising the entirety of the Arsenal backline, taking full advantage of their high line, but it was the table-toppers who thought they had opened the scoring, only to see Gabriel Jesus’ strike ruled out for offside.

The away side started the second half in the same sloppy fashion, William Saliba in particular was guilty of carelessly giving the ball away multiple times. But, captain Martin Odegaard eventually broke the deadlock, and his second goal of the day in the 75th minute all but sealed victory for the Gunners.

With Manchester City dropping points earlier in the day, this result is a huge statement as Mikel Arteta’s youthful Arsenal move five points clear at the top of the Premier League. Although it is yet another goalless defeat for Wolves, who remain rock-bottom, the players and fans should take confidence from what was an impressive display. 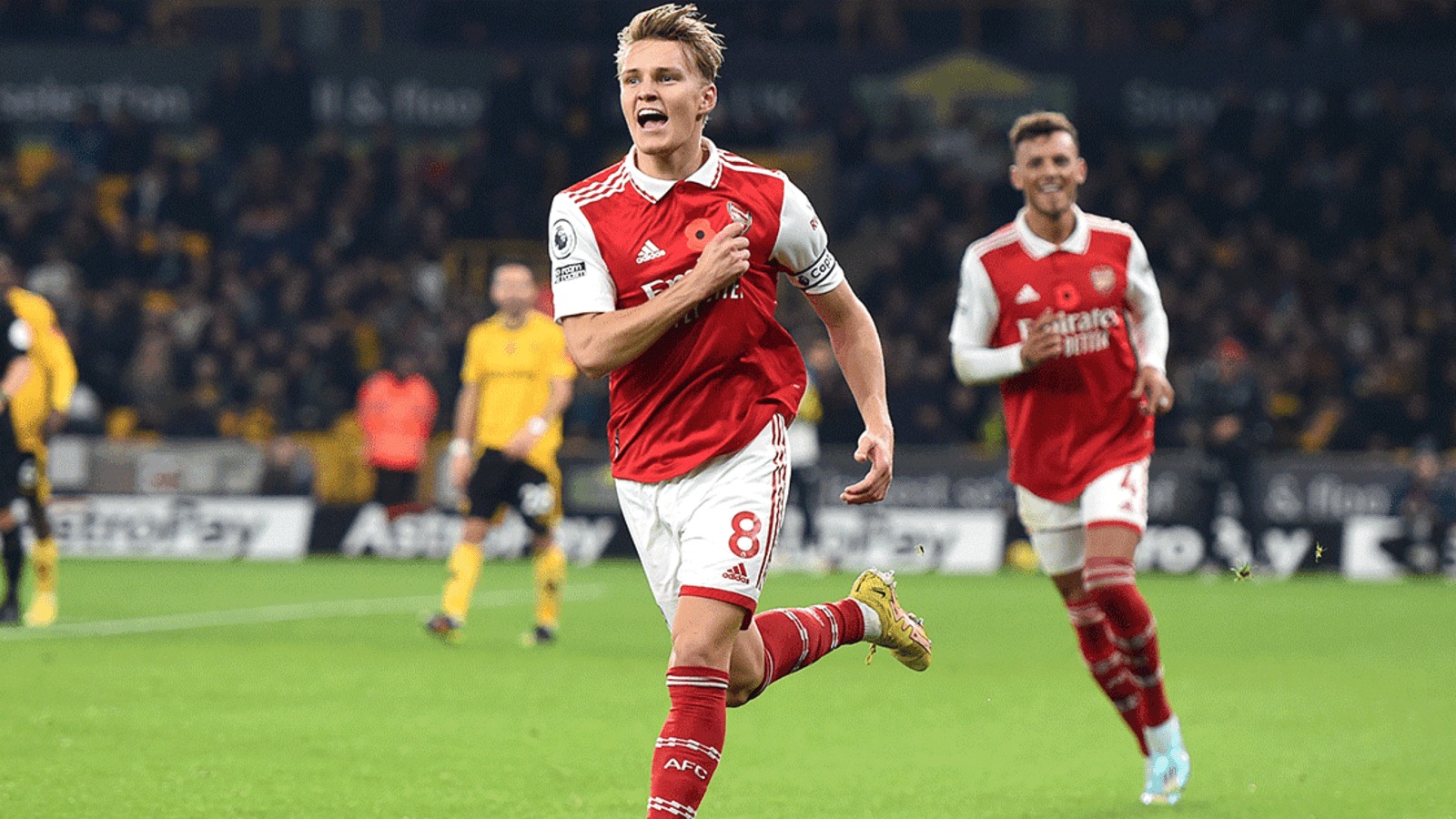