Suspended FIFA president Sepp Blatter has given an interview to Swiss television station RTS where he says that he came close to death during a recent health scare which saw him spend six days in hospital when he was admitted with a stress related illness.

RTS reported Blatter was in an intensive care unit for several days, and Blatter said he was happy he never lost consciousness over the 48 hours when he was the sickest.

It had been reported that the investigatory arm of the ethics committee has recommended bans of more than six years for Blatter and Platini after Fifa Ethics Committee opened up formal proceedings against them, it centres on a investigation over a £1.35m payment that Blatter made to Platinin in 2011, both had denied any wrong doing.

Blatter had previously been suspended for 90 days by FIFA’s Ethics Committee on Oct. 8 as result of an ongoing criminal investigation into his alleged mismanagement of FIFA funds.

Between the period of 1998-2002 when Platini was special adviser to Blatter, the Frenchman was paid £203,465 a year but both men argued that they had a gentleman’s agreement that Platini would get the extra cash at a later date.

Although the 79-year-old did not name his illness, which has been described as a stress-related breakdown, but said it brought him “between the angels singing and the devil’s fire,” in his first television interview since his Nov. 12 release from hospital.

Blatter began this interview by explaining his near-death experience.

Both men have maintained that the payment was a backdated portion of Platini’s salary for serving as Blatter’s adviser.

Blatter told RTS that because Platini is an “honest man” he should be reconsidered for the special election for FIFA president scheduled for February.

Blatter announced in May that he would step down as FIFA president in February after 17 years in office. Platini was once considered the favorite to replace Blatter, but was left off the official ballot due to his suspended status. 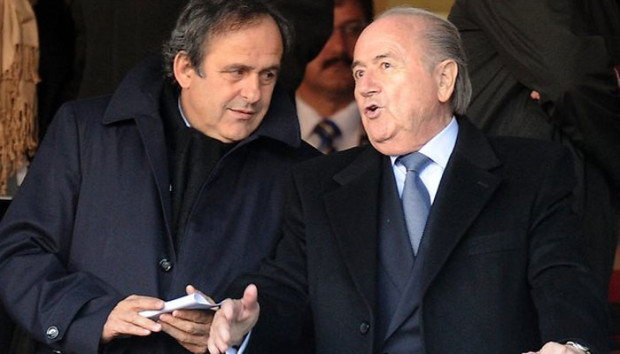