Charles Oliveira and Islam Makhachev have set themselves so far ahead of the rest of the lightweight division, that the best comparison for their showdown has to come from outside the realm of mixed martial arts. Imagine if Floyd Mayweather and Manny Pacquiao had faced off in 2008, when they were both in their primes, instead of 2015 when they were no longer the best versions of themselves. That is what fight fans will be getting when they tune in to watch UFC 280. Oliveira and Makhachev are in the best shape of their careers, they are unquestionably the two best fighters in their division, while also being near the top of the pound-for-pound list. This showdown has all the makings of a classic. There’s a lot to unpack here; without further ado, let’s get into it!

After losing to Paul Felder at UFC 218 in December of 2017, Charles Oliveira took six months away from the sport to reevaluate the direction of his career. The time away seemed to be exactly what he needed; he would go on to win his next four fights by a chokehold submission. To date, Oliveira still has not suffered another defeat since his loss to Felder in 2017. He has now won 11 consecutive fights and is widely recognized as the top competitor in the UFC’s lightweight division. Although, a missed weight cut cost him his belt in May of this year, many still recognize Oliveira as the champion of the division. On October 22nd, in the United Arab Emirates, he will have a chance to reclaim the belt he feels is rightfully his.

The lone loss of Islam Makhachev’s career came back in October of 2015, during the second fight of his UFC tenure. Since then, he has matured greatly as a fighter and he has not looked back. A series of untimely injuries caused him to miss all of 2020, however he returned to the octagon with a vengeance in 2021. He won all three of his fights last year, with all three victories coming by way of submission. In February of this year, he put an exclamation point on his win streak when he beat Bobby Green with a barrage of punches that ended the fight in the first round. Now, he is finally being given the title shot he feels he has deserved for years. When Oliveira and Makhachev meet in the center of the octagon, there will surely be fireworks. You won’t want to miss it!

When Aljamain Sterling became the UFC Bantamweight champion through disqualification against Petr Yan in March of 2021, there were loud detractors saying he was not the real champion. However, his split-decision victory over Yan at UFC 273 in April of this year left no doubt about who the real champion is. T.J. Dillashaw, on the other hand has had to deal with detractors emphasizing a different narrative. He was stripped of his Bantamweight title in 2019 after testing positive for PEDs. After a nearly two year absence from the octagon, Dillashaw won a split decision against Cory Sandhagen in July of last year. On October 22nd, Sterling and Dillashaw will meet in the octagon, with the UFC Bantamweight title on the line, while each man looks to silence his critics and prove he is the real champion of the division.

Petr Yan is a former UFC Bantamweight champion who has made up his mind that he wants nothing more than to regain his title. After losing his belt to Aljamain Sterling via disqualification, he defeated Cory Sandhagen to become the Interim Bantamweight champion. However, a split-decision loss to Sterling earlier this year means it is back to square one for Yan on his quest to reclaim UFC glory.

Sugar Sean O’Malley’s popularity skyrocketed last year due to three electric wins inside the octagon. His colorful hairstyles and outspoken post-fight interviews also added to the fanfare. However, the most important aspect of his popularity is his ability to fight. O’Malley is one of the best strikers in the bantamweight division, so much so that he even had a one-fight venture into professional boxing, which he won by knockout. Yan and O’Malley are two of the best competitors at bantamweight; the winner of their bout could very well be the next challenger for the championship belt. Make sure to tune in when these two warriors meet in the center of the octagon!

Beneil Dariush is a Black belt in Brazilian Jiu-Jitsu who is in the midst of a seven fight win streak. Mateusz Gamrot is also a Black belt in Brazilian Jiu-Jitsu, who is on a four fight win streak of his own. While both men are highly respected in the lightweight division, neither man has been able to land the ever illusive title shot. The lightweight division is rightly considered the most talented in the sport, and each of these men is seen as being in the second tier of the best contenders for the belt. However, a win at UFC 280 in front of a worldwide audience could go a long ways in changing that narrative. These men will lay it all on the line, knowing the trajectories of their careers depends on it. This is a fight that is sure to be worthwhile for fans across the sport!

Katlyn Chookagian is ranked as the number one challenger in the women’s flyweight division, while Manon Fiorot is ranked sixth. Most pundits agree that the winner of their bout on October 22nd will be next in line for a title shot against reigning UFC Women’s Flyweight champion, Valentina Shevchenko. Chookagian has not suffered defeat in over two years, while the lone defeat of Fiorot’s career took place more than four years ago. Each woman enters the octagon with momentum on their side and something to prove. Make sure to tune in for all the action!

UFC 280 can be viewed on pay-per-view via BT Sport in the United Kingdom and through ESPN Plus in the United States. As always, we’ll have all the latest updates about the outcomes of the fights, as well as in depth analysis, available right here at World in Sport! 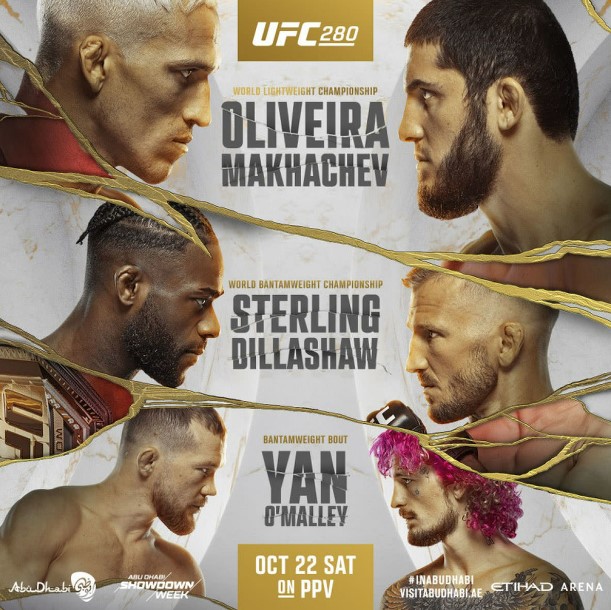