The 46-year-old former Dutch international Giovanni van Bronckhorst is back at Ibrox, this time to lead the team he played as a footballer between 1998 and 2001, and for which he won five trophies, including two Scottish league titles.

“I am delighted to be returning to Rangers, now as the club’s new coach. I feel lucky to work with a squad that is in an excellent position in all competitions and who have a winning mentality. I can’t wait to re-join the fans and start this new era for all of us,” said Van Bronckhorst, in remarks published on the official Rangers website.

“I look forward to carrying on and enhancing the work that has been done already alongside Ross Wilson and the board of the club, and I’m grateful for the chance to work again at this huge club.”

The Protestants revealed that the agreement of the contract will hold the manager until the summer of 2025, thus stating that the signing of van Bronckhorst is only dependent on the issuance of a work permit for the Dutchman. He has been out of competition since December 2020, when he left the charge of the Chinese side Guangzhou City.

ALSO READ:  Why Giovanni van Bronckhorst Is Too Good An Opportunity For Rangers To Miss Out On

Van Bronckhorst was featured on a long agenda of candidates Rangers have been tracking over a period of time, revealed sporting director Ross Wilson. This way Rangers board was able to act rapidly, relying on the new manager’s abilities within six days of Gerrard’s departure.

The Scottish Premiership champions’ main objective was to make the right decision for the future of the club, putting their sights on retaining their title this season and guaranteeing the Champions League qualification.

“I am delighted to welcome Gio back to Rangers,” said Wilson. “He was respected throughout Europe as a player and has already shown why he has that same respect as a coach.”

“Gio has already shown himself to be a winner, he knows the club, he knows the quality of the squad, and is absolutely aligned with our approach and mindset. Outside of the formal discussions, we have already had numerous other informal conversations and I can see how excited he is. I am looking forward to introducing him to the squad soon.”

ALSO READ:  Why Giovanni van Bronckhorst Is Too Good An Opportunity For Rangers To Miss Out On
Embed from Getty Images

Giovanni van Bronckhorst, who has also played for teams such as Feyenoord, Arsenal, and FC Barcelona, started his coaching career in 2010. His path began as an assistant coach with the under-21 Netherlands national team, before returning to the Rotterdam side, which he led between 2015 and 2019, winning an Eredivisie league title, two Dutch cups, and two super cups.

He managed to lead Feyenoord to a KNVB Cup triumph in his initial season in charge before securing the Eredivisie title the year after, putting an end to an 18 years league title drought.

After these achievements, van Bronckhorst embraced a different direction with the Chinese Super League club Guangzhou City, but after finishing 11th, he decided to leave the job due to personal life reasons.

ALSO READ:  Why Giovanni van Bronckhorst Is Too Good An Opportunity For Rangers To Miss Out On

Succeeding Sunday’s Premier Sports Cup semi-final match, van Bronckhorst will be in charge of the Rangers team for the first time against Sparta Prague in the Europa League at Ibrox before major away clashes in the league at Livingston and Hibernian.

Scottish champions Rangers are the current Premiership leaders, with four points clear ahead of bitter rivals Celtic. So far, the Glasgow club is yet disputing every competition even with the exchange of coaches at this time and things look promising with the arrival of Giovanni van Bronckhorst. 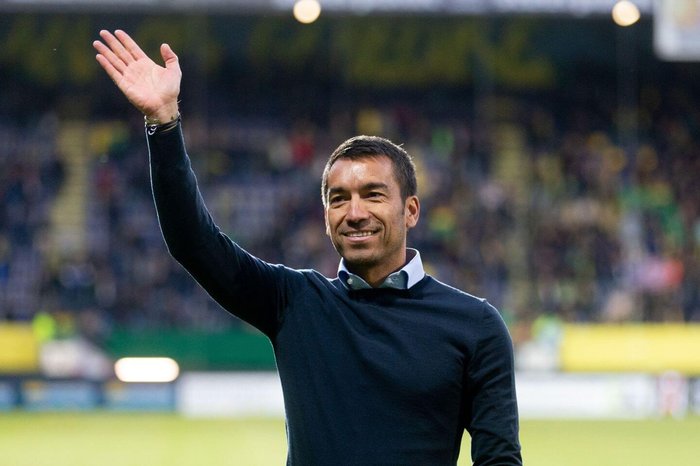