West Ham United emerged 1-0 victors over Wolverhampton Wanderers to claim a vital three points in the Premier League in their quest for Champions League football next season.

Czech Republic international Tomas Soucek, who was celebrating his 27th birthday on Sunday, scored the only goal of the game as he tapped in a Michail Antonio pass with half an hour left of the game to go in this tight and compact Premier League match.

This result pushes the Hammers up to fifth place in that table, above Arsenal in sixth place on goal difference and just two points behind Manchester United in fourth place, but the Gunners do have three games in hand on both sides.

After back-to-back draws in their last two Premier League games, including their 1-1 draw at home to Newcastle United last weekend David Moyes didn’t want to drop even more points in the race for Champions League football. However, his team created several good chances in this game and deserved to win the match despite the narrow victory over their opponents, who also have dreams of European football this season.

England internationals Aaron Cresswell and Declan Rice both had great chances to open the scoring for the home side, with Rice’s effort from 20-yards out rattling the right-hand post.

The Hammers could’ve doubled their lead and made their victory more comfortable, with Jarred Bowen, Pablo Fornals and goalscorer Tomas Soucek all having good opportunities to score before they had to endure mounting pressure from the away side, who stay eighth after their defeat in the London Stadium.

For Wolves, this was their third visit to the capital in the last two weeks, having beaten Spurs at the Tottenham Hotspur Stadium earlier in the month as well as suffering a last gasp loss to Arsenal last Thursday.

ALSO READ:  Are Leeds United ready for a potential managerial change in 2022?

After the defeat in North London, Bruno Lage made five changes in order to freshen up his team and give other players like Fabio Silva a chance to shine, but these changes only seemed to make his players struggle to find any fluency or rhythm throughout the game.

Although they got better during the second half, the substitutions of Mexican international Raul Jimenez and Portuguese Winger Daniel Podence wasn’t enough for Wolves to salvage anything out of the East London outfit.

He added: “We played 30 minutes in their half of the pitch and we tried to create our chances and also to understand we are playing against a strong team.

“Fabianski is one of the best goalkeepers in the world to stop crosses, tall defenders, and we needed to find a way – especially with our players – to score a goal.”

West Ham Head Coach David Moyes said “Soucek has got four goals now, so I’m not putting 10 beyond him. He got 10 last year and he had a great season so I’m hoping that gives him the confidence.

“I thought we were good on the ball, created some much-improved stuff. I thought we created more chances than we have in other games, so I thought there were lots of good things about today’s performance.” 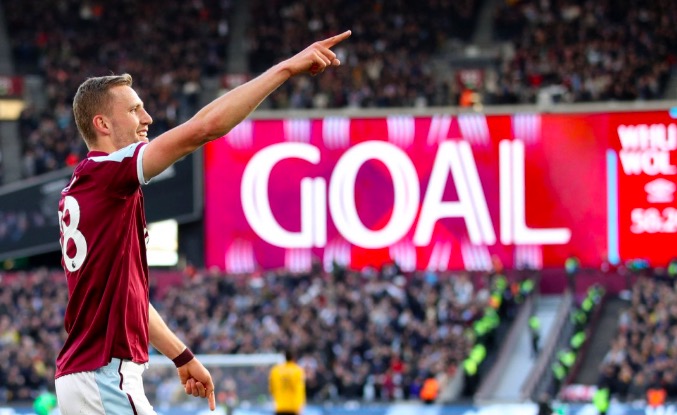