Four pacers? One Spinner? Who cares? Kohli’s bowling attack rip through England’s top order to take a 2-1 series lead at The Kia Oval.

With the hosts, 77-0, chasing 368, all three results possible going into the fifth and final day at a sunny Oval. Kohli and his men had it all to do on what looked a pretty flat pitch.

When Burns and Hameed were looking to carry on the good work from the final session of day four, everything seemed to be nice and calm in the England dressing room. That was until the Indian captain unleashed Shardul Thakur into the attack.

Just after reaching a half-century, Rory Burns received a peach of a delivery from Thakur from round the wicket. Burns managing to get an outside edge to Rishabh Pant.

Haseeb Hameed soon brought up his 50 with a wristy flick towards the square leg boundary against Jadeja.

India had an early review for lbw against Dawid Malan. Jadeja was the bowler, but hawk-eye clearly showed that the ball spun too much and just missed the leg stump.

Malan survived a close LBW shout as he tried to pad Jadeja from outside the rough. Kohli called for the review but the DRS decided to stick with Richard Illingworth’s decision of not out.

Jadeja and Thakur were all over Malan and drying up the runs. With the score 112-1, Jadeja should have had Hameed who uncharacteristically went for a massive hoick down the ground, smashed it straight at Siraj who dropped an absolute sitter at mid-on.

But his luck did not last as Hameed called him for a risky single and Mayank Agarwal, who was Rohit Sharma’s replacement in the field had no hesitation in running the left-handed number three out.

While Jadeja was looking threatening, firing the ball outside into the rough outside the right-hander’s legs stump, the England captain was busy at the crease and looking to score. Hameed on the other hand looked out of sorts against Jadeja, and that proved to be his downfall after lunch as he was bowled trying to defend Jadeja to the onside. The ball spun out of the rough and hit the top of the off-stump. Clever from the left-arm spinner but poor from Hameed, who misjudged the line in which the ball pitched.

Ollie Pope joined his captain at the crease at 141-3. Unfortunately, he did not last very long due to a pearler if an in-swinger from Bumrah, which castled him. England’s new number five who fell agonizingly short of a hundred in the first innings was gone for just two runs of 10 deliveries leaving the score at 146-4.

The procession of wickets continued to tumble as Johnny Bairstow received a corker of a yorker that castled him. The Yorkshire batsman was on his way back to the pavilion for a three-ball duck. 146-5 was the score.

It quickly became 147-6, when Jadeja lured Moeen Ali into a defensive prod outside his off-stump. with all that rough outside the Left-hander’s off-stump, this was a dangerous thing to be doing, and he got suckered into doing so. Substitute Suryakumar Yadav took a simple catch at short leg.

When Chris Woakes joined his captain in the middle, it seemed like the pitch had got better for batting, as the pair of them seemed to be scoring pretty freely.

That was until the England Captain, who was looking to guide the ball from just outside off stump, chopped on. Thakur and India were delighted at that wicket as Root was the only hope England had of possibly chasing down 366. This took the score to 182-7

Craig Overton got an early life when he was put down by Rahane of Bumrah. The ball bounced off a short length, took the glove, Rahane took a dive to his left, but failed to cling on. Overton also survived an LBW appeal, which was originally given by Richard Illingworth and then overturned by DRS.

England soon lost their eighth wicket when Woakes chipped one straight to KL Rahul at short mid-wicket, attempting to work a straight ball onto the on side. The face of his bat closed a little too early and Rahul made no mistake.

Robinson and Overton played a couple of nice late cuts down to the third-man region. This was until Umesh Yadav targeted the stumps and got Overton with another beauty. The score was 202-9 with India on the brink of going 2-1 up.

Overton seemed to be in some discomfort holding his elbow as the ball ricochet off the elbow and onto the stumps. Hopefully, it is not too serious heading into the final Test.

Anderson walked out to bat with England having little hope of saving the game. Robinson hit a nice straight drive down the ground before Umesh Yadav’s snorter of a bouncer caught England’s number one fast bowler on the glove and Rishabh Pant no mistake behind the stumps. Despite Anderson going for a review, DRS revealed there was a spike on ultra-edge and so this meant that the tourists go 2-1 with one to play.

The fifth and final Test takes place at Old Trafford on Friday 10th September. At the end of the third Test India had all the questions to answer, particularly on their team selection. They got it right in this game. now, it’s England’s turn. With the Ashes around the corner, do they think about resting some of their bowlers, particularly Robinson who has bowled 144.3 overs in this series?

Ravichandran Ashwin has yet to get a game in this series, given the fact that Old Trafford is a nice place to bowl spin, will Kohli be tempted to drop one of his seamers in place of the classy off-spinner?

Can England square the series or will India pick up their first Test series win in England in 14 years?

Tune in to World in Sport to find out. 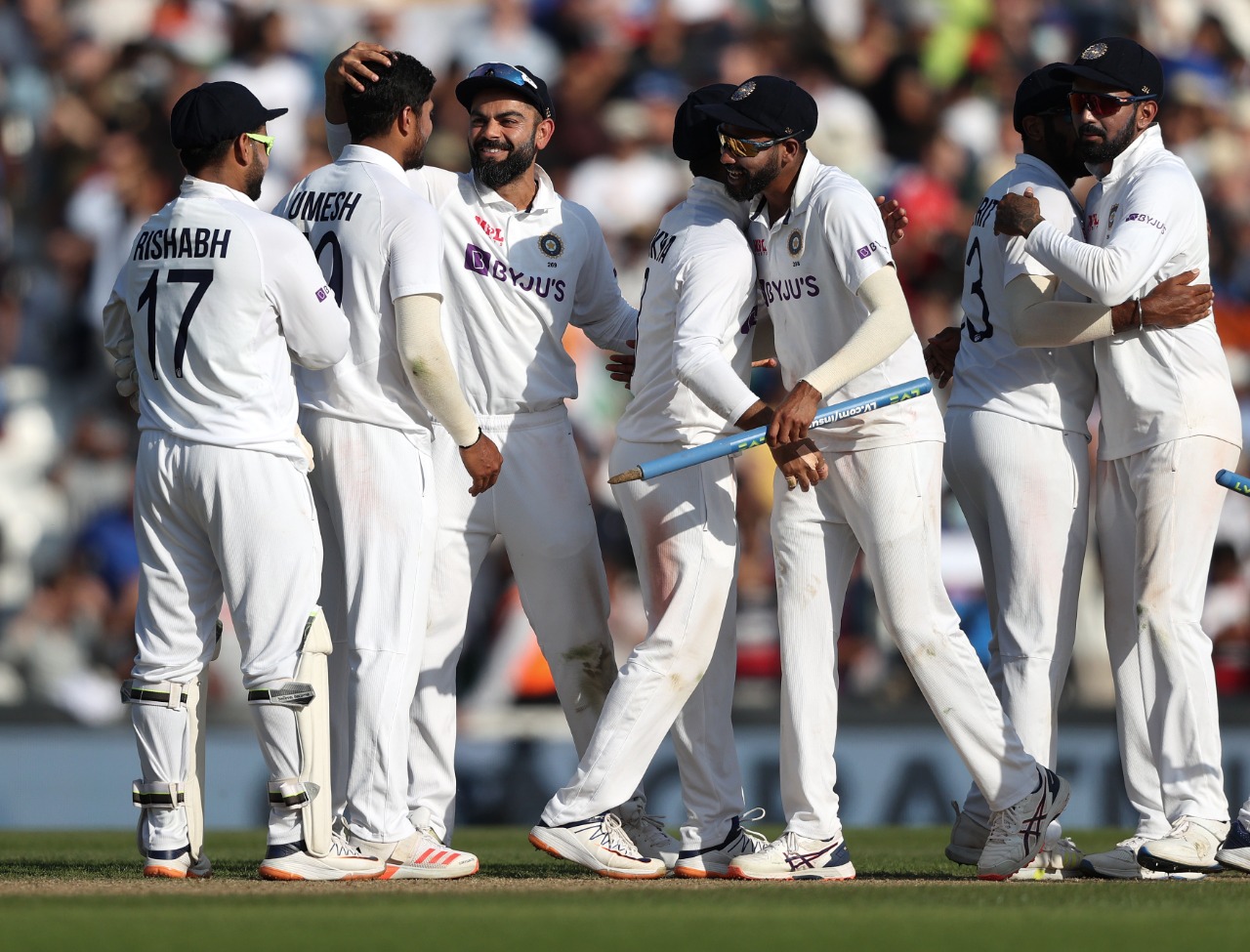