As the dust settles on what has been a stellar Euro 2020 championship, attention will invariably turn to the summer transfer window and the players who made a name for themselves in Europe’s biggest international competition.

Some players revived careers that seemed to be languishing (Raheem Sterling, Renato Sanches) while others emerge from the ether to become household names (Mikkel Damsgaard, Manuel Locatelli and Patrik Schick to name a few). And of all these new stars, many were left wing-backs. Below we take a look at four players that excelled on the left side of the pitch in the Euros.

Ten minutes into Italy’s first Euro fixture against Turkey, two things became clear. The first was that Italy were clear title contenders and the second was that I was foolish for not having heard of Spinazzola. As the Italian weaved his way around Turkish tackles, looking as comfortable and calm on the ball as Andrea Pirlo, he was no doubt impressing Jose Mourinho, his new manager at Roma.

Spinazzola’s pace, paired with his consistent overlapping with Insigne, made him a nightmare for defenders to deal with. Italy defends in a 4-3-3 formation but when in possession they shift to a 3-3-4 which nicely complements Spinazzola’s strengths, allowing him to run further upfield as part of the 3 in midfield.

However, Spinazzola’s defining moment took place at the other end of the field against Belgium when Romelu Lukaku tried to tap in a cross made by Kevin de Bruyne. Lukaku thought he had scored, only for Spinazzola to twist his thigh and block the shot. The goal-line clearance was immense and you needn’t have looked beyond the passionate celebrations of his teammates to realise the enormity of what Spinazzola had just done. He is a wingback of the highest order who enjoys having the ball at his feet but he also defends with typical Italian doggedness.

The only concern with the Italian has been his injury woes and this persisted in the Euros. During Italy’s quarter-final clash with Belgium, Spinazzola ruptured his Achilles, prematurely ending his tournament. The sight of Spinazzola being stretched off the field was a sad one but his class, intelligence and fast feet will be his legacy from this tournament.

Robin Gosens bears striking resemblance to a middleweight boxer, both in stature and mentality. His fitness levels are immense, his fighting spirit is second to none and his physicality is hugely impressive. Aged 27, Gosens has had to work for his place in the German national team, only making his international debut a year ago. You would not think it though given how Gosens has played this summer, cementing himself as one of Germany’s key players.

While the team struggled to develop any sort of consistency in the group-of-death, Gosens’ quality persisted as he defended resolutely and attacked down the flank with intensity. Realistically, this should have come as no surprise given the season Gosens just had at Atalanta, where he managed to score 11 league goals in 32 appearances from left wing back position.

Playing in a back five for both club and country has helped Gosens flex his attacking muscles, which was on full display when Germany played Portugal in the group stages. Gosens pressurised Portugal’s right back Semedo throughout the 90 minutes, scoring a header, assisting another goal and having a stunning flying volley disallowed due to offside. He rightfully won player of the match for the display.

While Gosens’ tournament was cut short following Germany’s last 16 defeat by England, his performances, particularly against Portugal, stand as a testament to his quality as a wing back. Is he the first true replacement of Philipp Lahm?

In the dying minutes of their final group stage match against Russia, Denmark was attacking down the left hand side of the field. The ball came to Maehle just inside Russia’s half. Assuredly he strode forwards, carrying the ball to the edge of the penalty area. He then patiently waits as two mindless Russian defenders sprint past him, Maehle then takes a touch and calmly curls the ball into the far left corner of the net. The goal perfectly illustrates Maehle’s poise.

Maehle is, however, much more than just a sleek finisher. He is defensively sound and has a great delivery. In fact, Maehle offered up the assist of the tournament against the Czech Republic, hitting a first time cross with the outside of his foot. The ball curled around the head of a Czech defender, falling right at the feet of Dolberg who tapped the ball in with ease.

Maehle’s exploits this summer have been amplified by the fact that, much like Gosens, his first international cap came in 2020. Maehle has also spent the entirety of the Euros playing out of position. He usually plays as the right wing-back for Atalanta, with teammate Gosens covering the other flank. For Denmark, Maehle has been moved to the left-wing back position and has not put a foot wrong, demonstrating a supreme level of versatility in doing so. Playing wing back necessitates a level of flexibility, since players may be asked to play in a back four or a back five. But Maehle, who it is worth noting prefers to play in midfield, has churned out world-class performances despite playing out of position.

Of all the left backs mentioned in this piece, Luke Shaw is the only one without an appearance for Atalanta. Surprising though this is, his performances have been just as impressive as the other three players. Scepticism over Shaw’s durability and decision making on the ball were rife heading into the Euros, which potentially influenced Gareth Southgate’s decision to start Kieran Trippier, a natural right back, on the left side of England’s defence in the tournament opener against Croatia. Shaw would have to wait until England’s second fixture against Scotland to start but from that moment his place in the team was never in question.

In a dreadfully dull goalless draw with Scotland, he was one of the leading lights in the team, pushing the three lions down the field with deliberate, direct runs down the channel. Throughout the tournament, Shaw also consistently fizzed balls across goal into brilliant goal scoring positions. This came to a head in England’s last 16 fixture against Germany, where Shaw assisted Sterling’s opener. Then against Ukraine, Shaw delivered a peach of a free kick which Maguire headed in to make it 2-0. And then, two minutes into the final, Shaw half-volleyed a cross past Donnarumma to become the first and only Englishman to score in a Euros final.

Shaw’s Premier League campaign heading into the tournament had been impressive but at the Euros the left back became immense. His defensive partnership with Maguire was almost impenetrable while his dead ball delivery, overlapping and crossing became impervious. In many ways, Shaw was England’s player of the Euros. 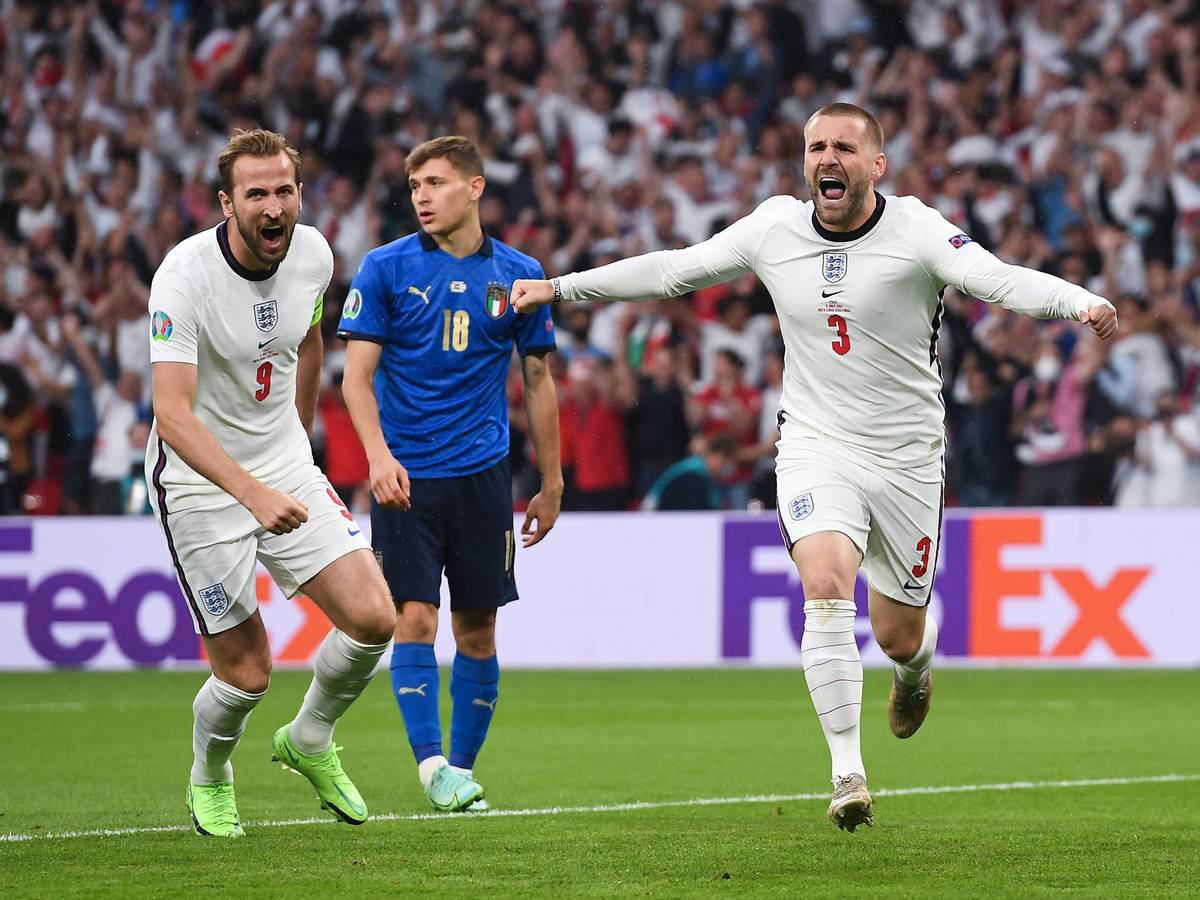