The Daily Mirror says that Wilshere is nursing a hairline fracture to his fibula, which could see the 23-year-old miss the first six to eight weeks of the upcoming campaign that kicks-off this weekend.

The England midfielder who missed nearly six months of last season after injuring his ankle in the 2-1 defeat to Manchester United at Old Trafford on 22 November, suffered the problem in training prior to Sunday’s Community Shield in which he was subsequently left out by Arsene Wenger as precaution

The 23-year-old’s career has been blighted by fitness issues thus far and he set for another spell on the sidelines.

Wilshere has had hip, hamstring and back injuries over the last five years, but the vast majority of his issues have been with his ankles, which have already ruled him out of more than two years of football.

The England international has undergone scans and if he requires surgery he could be out for up to three months.

The news means Wilshere will not only miss Arsenal’s opening fixtures to the Premier League season but also England’s final two qualifiers for Euro 2016 against San Marino and Switzerland in September.

He only made his comeback from that injury in May and while he was able to play a bit-part role in Arsenal’s end of season fixtures that included a substitute appearance in their successful FA Cup final team, Wilshere had set his sights on getting himself fully fit for the start of this season.

“The intensity of the Premier League is incredible,” Jack Wilshere told Men’s Fitness magazine last month. “The levels of fitness you have to reach just to survive in it is absurd.

“When you’re out for a few months it’s tough to come back. It takes a lot of work in the gym with the physios, the specialists, you’re willing to try anything that will help you get fit.”

This latest set-back has once again raised fears for Wilshere’s long-term future. 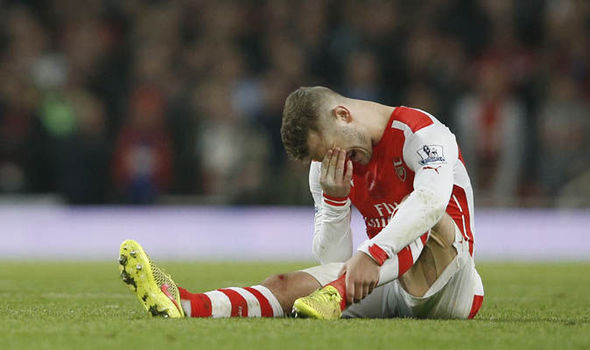