With a 2-1 win over Norwich City on Wednesday night, the Reds progressed to the FA Cup quarter-finals, while David Moyes’ side was eliminated by Southampton.

Liverpool finds themselves six points behind Man City and will hope to close the gap to three before the Manchester Derby on Sunday. Last time out in the league Jurgen Klopp’s side beat Leeds United 6-0.

As for the visitors, they are currently in fifth place and only two points behind Manchester United. Tomas Soucek was the only scorer in their recent league win over Wolves and David Moyes might be keen to make changes with an away trip to Sevilla in the Europa League on the horizon.

Liverpool attacker Roberto Firmino remains out of action due to his muscular problem, but Thiago Alcantara may be ready to return from his hamstring injury against Inter Milan in the Champions League next week.

Curtis Jones is also a slight doubt after feeling a twinge in his thigh during the FA Cup game and Joel Matip could also be a doubt due to illness (not Covid).

As for West Ham, Tomas Soucek required stitches on Wednesday but at this stage, there is nothing to suggest that the Czech midfielder will not be involved at Anfield.

West Ham came out victorious in the earlier meeting this season. A 3-2 victory was Klopp’s first league defeat of the season. Before that defeat, Liverpool were 10 games unbeaten against their opposition.

West Ham’s last victory at Anfield was in 2015 with Manuel Lanzini, Mark Noble and Diafra Sakho scoring in a 3-0 win.

It will be the 16th visit to Anfield as manager for David Moyes and he is yet to be on the winning side.

No team has kept a clean sheet in the last four meetings and the visitors are without one in 12 matches against Liverpool.

There have been more than 2.5 goals in eight of the last 10 meetings.

Liverpool has scored the first goal in eight of the last 10 meetings.

There have been less than 4.5 cards in the last 10 meetings.

For fans unable to make the trip to Anfield, they will still be able to watch the game live on Sky Sports Main Event with kick-off at 5:30 pm.

ALSO READ:  Are Leeds United ready for a potential managerial change in 2022?

Anfield is always a tricky place to come and Liverpool are unbeaten at home in all competitions this season. They have also scored the joint-most at home and conceded the least. Mohammed Salah has scored nine goals against West Ham and will be keen to add to the 19 Premier League goals he has this season.

As for West Ham, they are in the middle of a busy fixture period and will be keen to get through Saturday’s match without any knocks. Moyes’ side has scored the first goal in four out of their last five games and has been hard to beat on their travels. Jarrod Bowen has the second-highest goal contribution with 16 and will be the one to watch out for.

We expect to see a tight game but, with Liverpool’s recent form, we can see them picking up all three points. 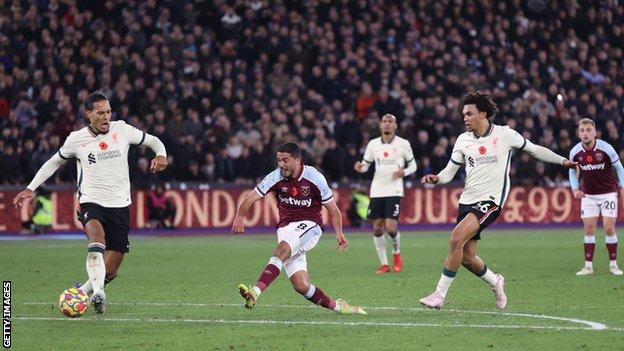