It was another week of high scoring, down to the wire drama action in the NBA. The starters for the 2021 NBA All-Star game have been announced and even some big plays from stars looking to make their case to be announced as reserves for the big spectacle. All this, plus a Finals rematch in this week’s highlights of NBA Roundup.

On Monday, the Chicago Bulls came up big against the Indiana Pacers in a 120 to 112 win that saw Zach LaVine knock down 30 points for the Bulls, followed by 19 points from Coby White, Wendell Carter Jr. with 11 points, and Thaddeus Young with 13 points and 11 rebounds. Domantas Sabonis had 25 points and 10 rebounds for the Pacers, followed by 23 points and 15 rebounds from Malcolm Brogdon. The New York Knicks prevailed over the Atlanta Hawks in a 123 to 112 contest in which Julius Randle made 44 points for the Knicks, followed by 21 points from R.J. Barrett. Trae Young led the Hawks with 23 points, followed by Clint Capela’s 15 points and 18 rebounds. The Utah Jazz defeated the Philadelphia 76ers 134 to 123. Jordan Clarkson led the way for the Jazz with 40 points, followed by 24 points from Donovan Mitchell. For the Sixers, Ben Simmons had 42 points and 12 assists, Tobias Harris made 36 points and 10 rebounds, plus Dwight Howard had 14 points and 12 rebounds. The Los Angeles Clippers defeated the Miami Heat in a 125 to 118 win that saw Jimmy Butler with a triple-double of 30 points, 10 rebounds, and 10 assists, Bam Adebayo had 27 points and 12 rebounds, and Tyler Herro with 27 points. Marcus Morris Sr. led the Clippers with 32 points.

LeBron James and the Los Angeles Lakers prevailed over the Minnesota Timberwolves on Tuesday with a 112 to 104 win. LeBron led the way with 30 points and 13 rebounds. Rookie Anthony Edwards had 28 points for the Wolves. The Brooklyn Nets won big against the Phoenix Suns 128 to 124. James Harden came up big with 38 points and 11 assists. Chris Paul made 29 points for the Suns, followed by Devin Booker’s 22 points. The San Antonio Spurs-Detroit Pistons game was postponed due to health and safety reasons.

The Sixers bounced back from their loss two nights ago and came away with a victory against the Houston Rockets on Wednesday. In a 118 to 113 contest, Joel Embiid had 31 points and 11 rebounds, followed by 24 points and 15 rebounds from Tobias Harris. Seth Curry with 25 points and Danny Green with 12 points. John Wall led the Rockets with 28 points, DeMarcus Cousins and Ja’Sean Tate had 19 points each. The Golden State Warriors came from behind in an overtime clash with the Miami Heat. Stephen Curry made 25 points and 11 assists, Kent Bazemore had 26 points, plus Kelly Oubre Jr. and Andrew Wiggins with 23 points each. Jimmy Butler had another triple-double for the Heat with 13 points, 12 rebounds, and 11 assists, followed by Tyler Herro’s 11 points and 15 rebounds, and 24 points from Bam Adebayo.

Thursday saw a trio of big NBA action, starting with the Toronto Raptors winning big over the Milwaukee Bucks. Norman Powell had 29 points for the Raptors, followed by 27 points from Pascal Siakam. Giannis Antetokounmpo had 23 points and 12 rebounds for the Bucks. The Brooklyn Nets shocked the Lakers in a 109 to 98 contest. Harden had 23 points and 11 assists, followed by Kyrie Irving’s 16 points for the Nets. LeBron led the Lakers with 32 points. The Miami Heat pulled off a convincing win against the Sacramento Kings, which saw Bam Adebayo and Jimmy Butler each with a triple-double. Adebayo had 16 points, 12 rebounds, and 10 assists. Butler had 13 points, 10 rebounds, and 13 assists.

On Friday, the Clippers defeated the Utah Jazz in a close 116 to 112 win. Kawhi Leonard had 29 points for the Clippers, followed by Lou Williams with 19 points, and 15 points for Paul George. Donovan Mitchell led the way for the Jazz with 35 points.

Saturday saw an NBA Finals rematch between the Miami Heat and the Los Angeles Lakers. The Heat exacted their revenge against the Lakers in a close 96 to 94 win.  Kendrick Nunn led the way for the Heat with 27 points, followed by Adebayo’s 16 points and 10 rebounds, 24 points from Jimmy Butler, and Duncan Robinson’s 11 points and 10 rebounds. Kyle Kuzma led the way for the Lakers with 23 points, followed by Montrezl Harrell with 18 points and 10 rebounds, plus LeBron with 19 points. The Charlotte Hornets won big against the Golden State Warriors 102 to 100, which saw Terry Rozier knocked down the game-winner as part of a 36 point performance. 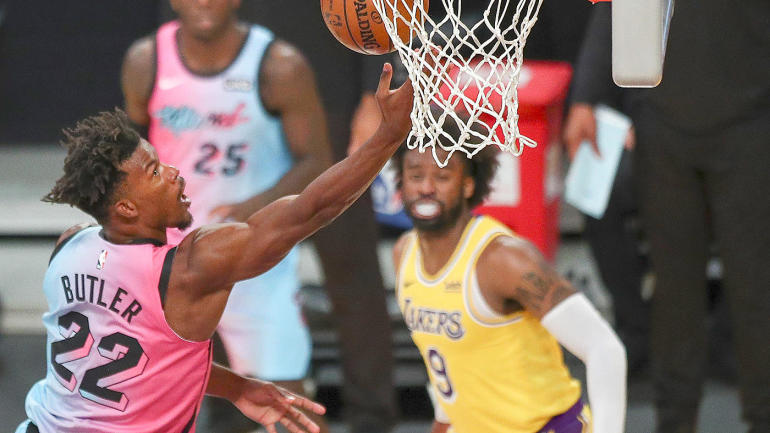