The NBA All-Star game is firmly in the rearview mirror and rosters are more or less set after an insane trade deadline. Now, it’s time to start getting ready for the NBA Playoffs.

This promises to be one of the most exciting stretch runs in recent NBA history. With no clear front-runner and most of the league’s superstars in good health, the O’Brien trophy could conceivably be won by several teams.

While teams like the Miami Heat, Chicago Bulls, Memphis Grizzlies, and Cleveland Cavaliers have provided some fun storylines throughout the regular season, we believe the following five teams should be pegged by most of the best US online sportsbooks as the favorites to win the NBA Finals.

The Process Version 5.0 is ready to launch in Philadelphia. After a disastrous second-round exit to the Atlanta Hawks in last year’s NBA Playoffs, the partnership of Joel Embiid and Ben Simmons had reached its breaking point. Simmons demanded a trade and sat out for the entire first half of the season citing mental health reasons for why he could no longer play in Philadelphia.

It looked like a disaster and a wasted year of MVP-contender Joel Embiid’s prime until things started to go south up in Brooklyn. A trade deadline swap that sent Simmons, Seth Curry, and Andre Drummond to the Nets for former MVP James Harden has reignited the spark in Philly.

While it remains to be seen if the Harden-Embiid pairing can find more success than the Simmons-Embiid pairing, adding a player of Harden’s stature has to put Philly in the conversation as a serious title contender. While the loss of supporting players Curry and Drummond will hurt, the Sixers supporting cast of Tyrese Maxey, Matisse Thybulle, Tobias Harris, and Danny Green will all have to contribute even more.

Embiid has kept the team afloat through the Simmons saga and Harden has brought a renewed energy to the fanbase. We’ll see if they can actually win some games together now.

The defending champions have to be in the conversation. Led by one of the league’s greatest superstars in Giannis Antetokounmpo, Milwaukee is a perennial title contender.

The questions lie not with the Greek Freak, but with his supporting cast. Jrue Holiday has been his usual solid self, but Khris Middleton has had an up and down 2021-22 campaign. Add in injuries to key role players Brook Lopez and Pat Connaughton and the question of whether or not Milwaukee has enough support for their start has reared its ugly head.

A trade deadline swap of Donte DiVencenzo for aging big man Serge Ibaka will hopefully steady the frontcourt but also leaves the Bucks quite thin on the wing. This seems to be a bet on Connaughton coming back quicker than Lopez, like Giannis, Ibaka, and Lopez don’t make a ton of sense as a trio.

If Milwaukee hopes to go back-to-back, it looks as if Giannis will have to shoulder the burden and will them to another ring. Luckily for Milwaukee fans, there aren’t many better players in the league on which to rest your hopes.

Like a phoenix rising from the ashes, the Golden State Warriors have completed their soft reset in the post-Kevin Durant era and look to be back in title contention for the next few seasons.

Powered by another yet phenomenal Steph Curry season, the return of Klay Thompson after nearly three full calendar years of injuries, and the emergence of young players Jordan Poole and Jonathan Kuminga, the Warriors are back.

Currently standing at second place in the Western Conference, absolutely nobody wants to face this battle-tested former dynasty in a seven-game series. The lingering question remains Draymond Green’s back injury.

The crucial pivot point of Golden State’s offense and defense has been out since early January and so far has no return date. Hopefully Green can get back to full health and we can watch Steve Kerr’s Warriors push for one more title.

The league leaders in off-court drama have to be accounted for as well. Despite currently being on the fringe of the play-in tournament, a team with as much talent as Brooklyn can never be counted out.

Star guard Kyrie Irving has been only a part-time player this season due to his choice not to comply with New York City’s vaccine mandate, but that mandate should soon be lifted. The mercurial guard’s part-time status was reportedly a key factor in Harden wanting out, but Brooklyn is banking on Irving running the show in the home stretch.

The addition of Simmons, Curry, and Drummond should provide much-needed depth as well. Simmons has been known to shrink in the playoffs during his time in Philadelphia, but a less-important role with the Nets should allow Head Coach Steve Nash the chance to bench the Australian in big moments, if necessary. This was not possible in Philadelphia because Simmons was the team’s second-best player and primary offensive initiator.

Of course, it’s insane that we’ve gone this far without mentioning one of the league’s greatest players of all time in Kevin Durant. Durant’s time in Brooklyn has been somewhat marred by injuries, but when he has played, he’s proven himself to still be one of the league’s best and was just a shoe size away from single-handedly dragging the Nets past the eventual-champion Bucks in last year’s playoffs.

Even after a rough stretch the star duo of Irving and Durant, complemented by a new supporting cast from Philly, has to be mentioned as a real contender.

Despite making the NBA Finals last season, the Suns still manage to be consistently overlooked. Their road to the Finals was filled with injuries from key opposing players, so many thought their run was just a fluke. This season has debunked that theory.

Led by Devin Booker, Chris Paul, and Deandre Ayton, the Phoenix Suns have absolutely been the best team in the entire NBA throughout this regular season. Their star trio with perfect role players like Mikal Bridges, Jae Crowder, and Cam Johnson, have formed a nucleus that currently stands atop the league standings.

The only question mark hers is with the aging Paul. While he is still an All-NBA level player, eventually Father Time wins all battles. He is currently out at least 6-8 weeks with a broken thumb. Paul is expected to be back for the playoffs, but if he isn’t 100% then the Suns’ chances drastically decrease.

Still, there’s no reason to count out the Suns as a serious title contender just yet. In fact, they may just be the frontrunners. 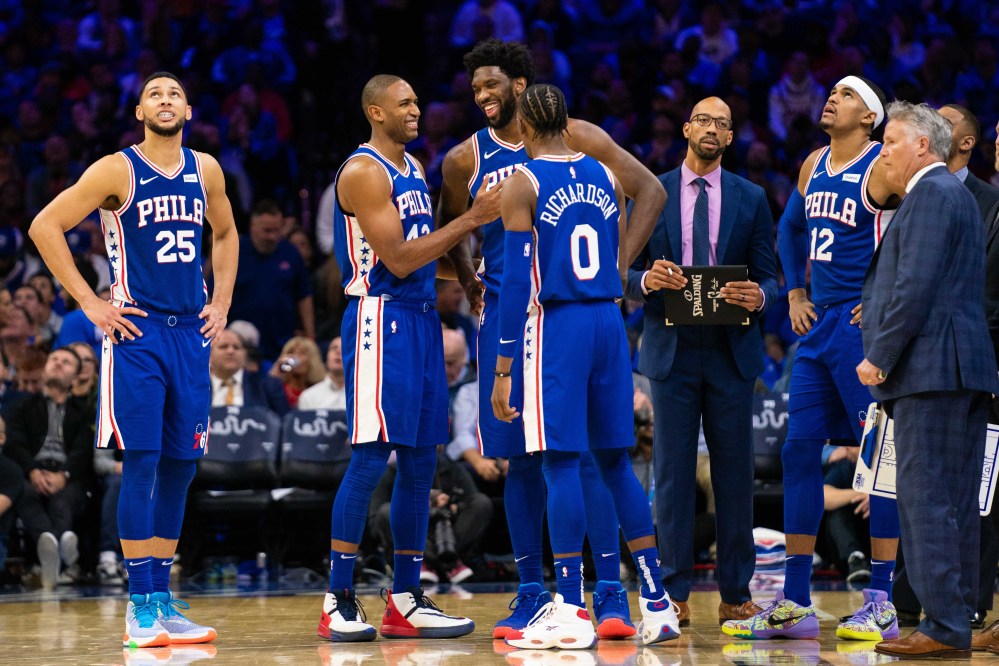