Equalling the Championship goalscoring record last Saturday, Aleksander Mitrović became the second player in history to score 31 goals in a season. Remarkably the Serbian forward still has 16 games left and will no doubt have his eyes set on one thing.

Mitrović is currently averaging a goal every 79 minutes and has three hat tricks to his name, including two in the first half. With Fulham being the top scorers in the division with 78, there is no doubt Mitrović will have the record to himself.

With that in mind, we take a look at the Championship top scorers in the last 10 seasons and see where are now.

After a seven-year stay away from the Premier League, Southampton won promotion back to the top flight, finishing second with 88 points and scoring 85 goals. Saints forward Lambert contributed with 27 goals and won the golden boot. In the Premier League, Lambert went on to score double figures in successive seasons before completing a move to his boyhood club Liverpool in the summer of 2014.

Spending one year at the club, he scored two goals in 25 games and would later spend time at West Brom and Cardiff City before retiring in 2017. He appeared 11 times for England making his debut at the age of 31 and was part of the 2014 World Cup squad.

Murray had a fantastic season with Crystal Palace, scoring 30 goals to help them win promotion through the play-offs. The journeyman striker sustained a serious knee injury in the semi-final which forced him to miss the victory over Watford.

He was sent out on loan to Reading in 2014 before completing a move to Bournemouth a year later. He joined Palace’s rivals, Brighton in 2016 and was part of the side that earned a promotion to the top division for the first time. Appearing over 150 times for them, he would have a brief loan spell at Watford before retiring at Nottingham Forest in 2021. Murray now works as a pundit for Sky Sports’ EFL coverage.

The third all-time championship top scorer racked up an impressive 28 goals despite his side Leeds United disappointingly finishing 15th. McCormack would join Fulham a season later and would enjoy two great individual seasons before joining Aston Villa for £12 million in 2016.

The former Scottish international had a torrid time at the Midlands side and would only manage 20 Championship appearances. He was loaned out to Nottingham Forest and spent time in Australia and Scotland before being released in 2019. McCormack had a brief spell at National League side Aldershot Town but only featured twice. At 35, he is currently without a club and it is unlikely somebody would take a punt on him.

Following a successful season for Ipswich Town which saw them reach the play-offs, Irish target man Murphy scored a respectable 27 goals. Murphy scored double digits again the following season before being picked up by recently relegated Newcastle United. He only lasted one season on Tyneside, scoring five goals in the team’s title-winning season.

Since then, he has spent time at Nottingham Forest, Bolton and hometown side Waterford Town. At the age of 38 Murphy is without a club.

Arrived from Brentford in 2015 for a reported £11 million, Gray’s 25 goals helped fire Burnley to the Championship title.  He beat the likes of Abel Hernández, Jonathan Kodjia and McCormack to win top scorer.

Scoring nine goals a year later in the top flight, he moved to Watford for £18 million and has scored a disappointing 19 goals in 133 league games. In the most recent summer, he joined QPR on a season-long loan. Due to injuries, the Jamaican international has only appeared seven times scoring two goals.

Another Leeds player led the scoring charts this season, despite the fact that they missed out on the playoffs once again. Wood’s 27 goals were only enough for a seventh-place finish, five points adrift off nearest side Fulham.

In 2017, he was transferred to Burnley for £15 million. Since then, he’s established himself as a Premier League regular, scoring at least 10 goals in each of the Clarets’ four top-flight seasons. Aged 30, Wood has recently joined Newcastle United for a staggering £27 million. He has played four games since arrival but has not found the net.

The lowest tally for a top scorer in a Championship campaign, Derby County’s Vydra managed 21 goals. The Czech Republican international beat the likes of Diogo Jota, Neal Maupay and Lewis Grabban to the golden boot.

Derby lost to Fulham in the play-off semi-final that season and in the summer Vydra would leave to join Premier League side, Burnley. Costing a reported £11 million, he has featured 76 times in the top flight but has been disappointed with only seven goals.

The Finnish international scored 29 goals in Norwich City’s title-winning campaign. Daniel Farke got his side playing fantastic football and with talented players such as Emiliano Buendía and Mario Vrančić it is understandable why they got 94 points.

A year later he scored a respectable 11 goals in a tough Premier League season before finding the net 26 times in another fantastic Championship campaign. Back in the top flight, Pukki has scored six goals in 23 appearances.

Having met each other in the play-off final that season, Mitrović and Watkins tied with the most goals in a season with 26.

Beating Brentford in extra time, Fulham’s forward loves playing in the Championship and has 69 goals for them in the division. With 31 goals this season the Serbian is set to smash the record.

As for Watkins, the final would prove to be his last game for the club.  He joined Aston Villa for a record Championship sale of £33 million and had a successful first season in the Premier League, scoring 14 goals. Watkins has since been capped for England and scored on his debut against San Marino.

Last season, Toney was on fire setting a new record for most goals scored in a season since the league was renamed in 2004. Brentford and Toney enjoyed a fantastic campaign which saw them promoted to the Premier League for the first time. He scored 31 goals which included penalties in both the playoff semi-final and final.

Aged 25, the forward has featured 21 times in the top flight and has six goals and two assists.

It will be interesting to see how many goals Mitrović gets and whether he manages to hit the 40 goal mark. 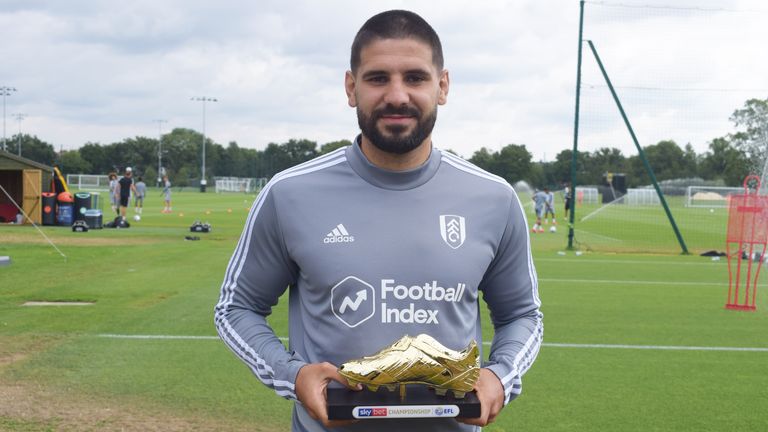