The latest round of Premier League fixtures began on Friday evening in the West Midlands as Wolves welcomed Leeds to Molineux, let’s see what happened in this one…

Wolves grabbed a fabulous come from behind win at St Mary’s against Southampton last time out, there second win in three outings as they slowly begin to turn their season around again after a poor run, and victory over this exciting Leeds outfit would take them above their opponents into 11th.

Leeds as we know under Marcelo Bielsa will only play one way, but you’re not sure what result you’re going to get with them, and their last five games have seen three wins and two losses, with one of those losses coming at The Emirates against Arsenal last time out, although they did give the Gunners concern when they came from 4-0 down to lose 4-2, but at times in the first half they were found wanting against an Arsenal side with a firing Pierre-Emerick Aubameyang in their ranks.

Leeds knew a win in this one though would take them back above Arsenal into tenth, but they were going into this one still without the influential Kalvin Phillips, Leeds have lost their last four league matches without him so it is a concern whilst he remains out injured, and they were certainly over-run for long spells last time out, and without him, some felt they would not be able to keep Wolves at bay.

Wolves had also won their past four league matches against Leeds too, scoring nine goals and conceding just once in those contests, and they were unbeaten in eight topflight home meetings, winning five of those, so history and the current situation certainly pointed towards a home win, but as we know, Leeds can quite easily turn it on when they want to.

And the hosts had not netted back-to-back victories in the league since October, whilst Leeds had won six of their past seven Premier League away matches played outside London, oh and Patrick Bamford had scored six goals in five Friday night appearances for the visitors, so he does like a Friday night goal, so maybe something for Leeds to hold onto.

Wolves were probably the better side in the opening forty-five minutes, led by Pedro Neto, who was the best player on the pitch in the first period, and he forced Illan Meslier into a superb save from long range, whilst the young Leeds keeper also kept out a couple of efforts from Nelsen Semedo as the stopper had a decent half in the visitor’s goal.

Leeds though certainly had their moments too, the best of those coming just before the half hour mark when Mateusz Klich saw a skewed cross catch out Rui Patricio at his near post and strike the near post before the hosts managed to somehow scramble the ball away, it had been a very entertaining opening half, but there were no goals to show for it as the teams made their way back into the dressing rooms for half time.

Would we see a breakthrough? Well, just past the hour mark Leeds went so close to taking the lead when a brilliant free kick swung into the Wolves box by Raphinha saw a powerful header by Liam Cooper go straight at Patricio when had it been either side of him it would have surely been a goal, but then moments after this Wolves did take the lead.

Adama Traore ran towards the Leeds area and hit a brilliant effort which smacked off the woodwork and then off the back of Meslier who had dived to try and save the effort and into the net, so unfortunate for the Leeds keeper, but there was nothing he could do, and Wolves now had the advantage. It was a quality strike from the Wolves attacker though, and it probably got what it deserved.

Could Leeds respond? Cooper got on the end of another Raphinha set play but saw Patricio save at his near post, and then Bamford thought he had another Friday night goal when he burst through and rifled past Patricio, but the flag then went up and VAR confirmed it was offside, and Leeds were denied a leveller.

Wolves saw a Joao Mourtinho effort fly off target, but it was Leeds who were doing most of the pressing in the final part of the contest, and they had two great chances in stoppage time, sub Helder Costa saw a great chance saved by Patricio, and then Raphinha saw a header clawed away by the Wolves stopper, and the hosts held on to take a well earned three points in what was a terrifically contested match. 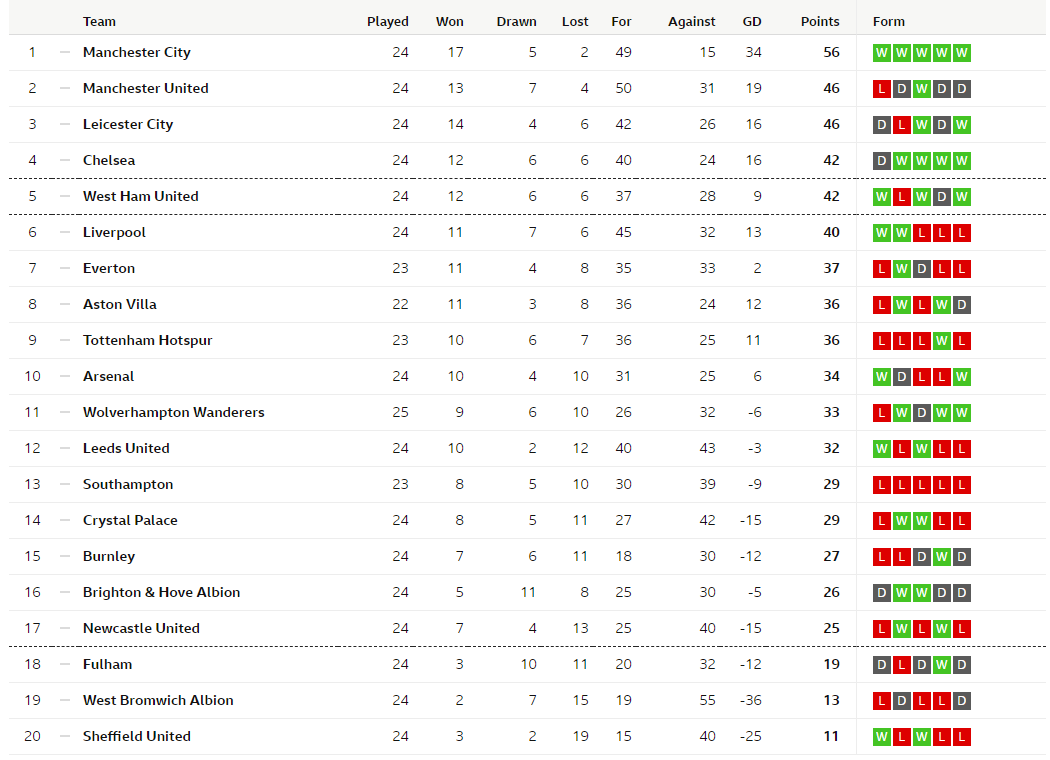 Wolves leapfrog Leeds into 11th now, they have taken ten points from a possible twelve now and are turning the corner, Leeds draw a rare blank in front of goal and that is back-to-back losses for them now.

Let’s look ahead to this weekend games, shall we…

Burnley v West Bromwich Albion (3pm) (Baggies need a win and nothing else, Clarets can go eleven clear of bottom three with victory)

Liverpool v Everton (5.30pm) (Win for Toffees in Merseyside derby at Anfield sees them go level with sixth-placed Liverpool, hosts could go into top four if they win and Chelsea and West Ham both lose this weekend)

Fulham v Sheffield United (8pm) (Huge game for The Cottagers, they must win to keep pressure on Newcastle, Brighton and Burnley, victory would mean they would only be three behind Newcastle and four behind Brighton ahead of those sides games Sunday/Monday, Blades need to win, nothing else will do)

West Ham United v Tottenham Hotspur (12pm) (A win for The Hammers will take them into the top four if Chelsea fail to win on Saturday, Spurs can get themselves closer to the top four with victory in a game they feel they cannot lose)

Aston Villa v Leicester City (2.05pm) (Midlands derby at Villa Park, Villa can get closer to top four with win if results go their way, Foxes will go second if they avoid defeat ahead of Man Utd game later in the day)

Arsenal v Manchester City (4.30pm) (Mikel Arteta takes on the master in Pep Guardiola at The Emirates and will hope his Gunners side can stop the league leaders in their stride, they could go as high as seventh with victory, City though looking for an EIGHTEENTH straight win)

Manchester United v Newcastle United (7pm) (United know a win will see them go back into second regardless of how Leicester do at Villa, Newcastle really do need a positive result and could only be ahead of Fulham by just three points at kick off)

Brighton & Hove Albion v Crystal Palace (8pm) (Another derby on Monday night sees The Seagulls looking for the points to take them further away from the bottom three, Palace themselves would like a win just to end a run of two straight defeats and of course net a win over their bitter rivals) 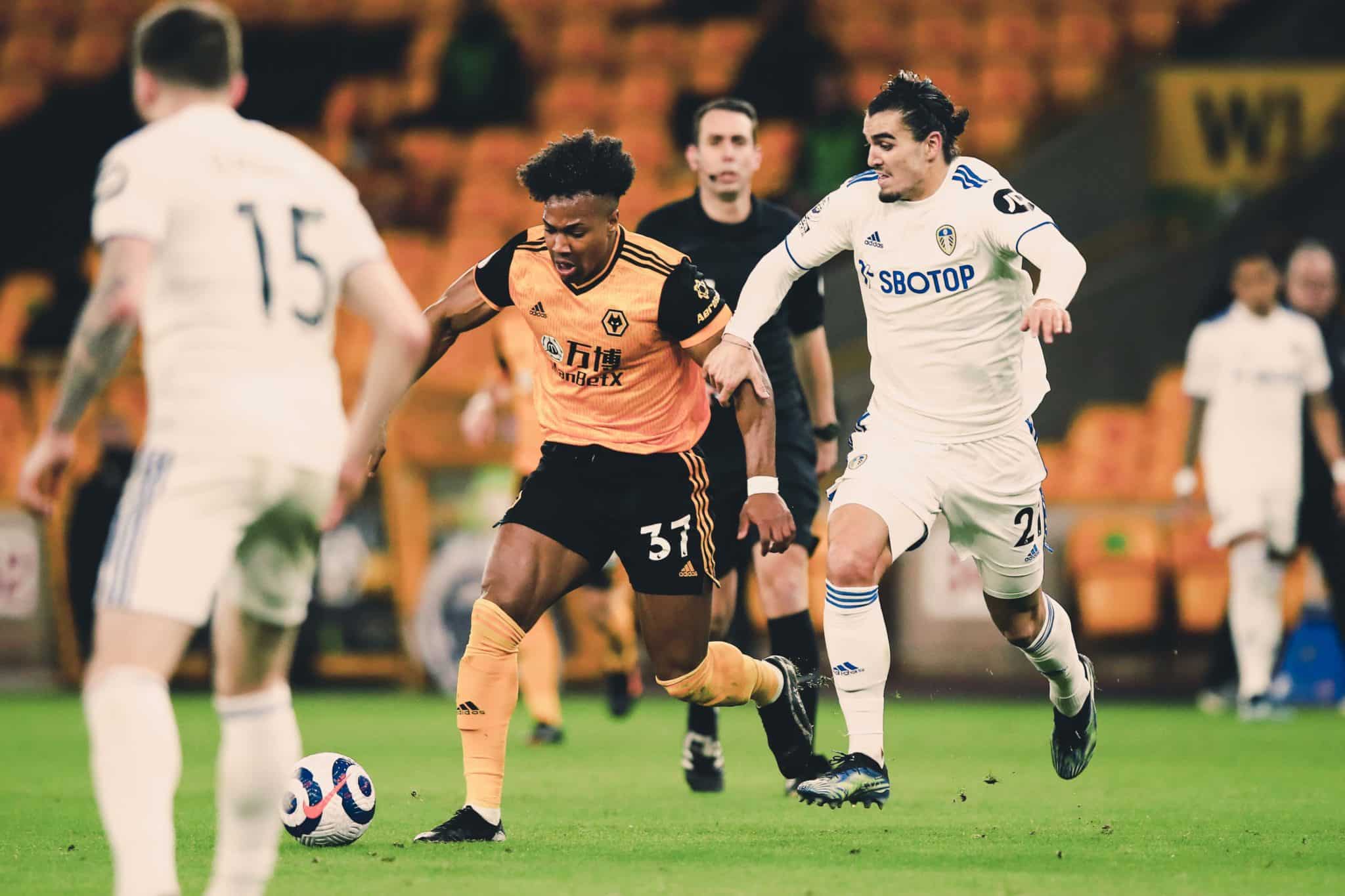