The Bahrain Grand Prix was the perfect launch that the 2021 Formula 1 season could have hoped for. The seven-time World Champion Lewis Hamilton, driving a slower car fended off the heir apparent, Max Verstappen, in a faster car in what was just the first round of the 23 round fight these two are going to engage in this season.

On the other side of the grid at the Bahrain Grand Prix, the Formula 1 midfield delivered yet another close battle where the drivers of the highest calibre were yet again embroiled in an ultra-close battle for supremacy.

This race was the perfect advertisement for Formula 1 and the average Formula 1 fan would surely be excited if this is what the next 22 races are going to look like. Let’s look back at the race and pick out the 5 key storylines from the Bahrain Grand Prix.

#1 The Bahrain Grand Prix was just round one

That’s correct! The Bahrain Grand Prix was just the first race of the season there are still 22 more races left. The reason why Formula 1 is so good right now is that we have two similarly paced cars driven by two of the best drivers on the grid fighting for the championship, we have a midfield of five teams close to each other fighting for the midfield honours and to add to this we have a grid with four World Champions and 10 race winners.

Unless either Mercedes or Red Bull can find a magic bullet we will see the two teams fight it out every race. And we will see the midfield do the same. As a Formula 1 fan, there has never been a better season to follow the sport and the best part is that there are as many as 22 races yet to be contested.

The only difference between Mercedes and Red Bull in the race was “experience”. Experience of fighting at the front. Red Bull has not fought for the title since 2013. They have picked up a win here and there but they have not been in such a high-stakes environment for a while.

Mercedes, however, has been there and done that for the last seven years. Red Bull, a team that has been the shark and tried to attack Mercedes when it was leading was caught in an unfamiliar position. Mercedes was proactive, they knew they could not beat Red Bull in a straight fight, that’s why they tried something out of the box and implemented an entirely different strategy.

Lewis Hamilton to his credit was able to fend off the fast charging Max Verstappen at Bahrain of all circuits where overtaking is comparatively easier. What the Bahrain Grand Prix showed was that despite not having the fastest car on the grid, Mercedes was still able to win the race. Right now, Mercedes and Lewis Hamilton are the gold standards of how a team and driver combination should work.

The Bahrain Grand Prix is a setback for Red Bull, there is no other way to say it. They had the fastest car, if they were slightly more proactive with Verstappen on the radio then they might have had a better chance to win the race. As I alluded to earlier, Max Verstappen and Red Bull have been the hunters for far too long, they’ve chased the faster car almost every time in the last few years.

They found themselves in an unfamiliar position at the Bahrain Grand Prix and paid the price. Even then there were multiple upsides to focus on at the end of the race. Max Verstappen beat the Mercedes by a gap of almost 4 tenths in qualifying.

The car is quick in all conditions. And more importantly, there are still 22 more races to go. Losing one race is not the end of the world if they can learn from it. All they have to do is stay calm, focus on what they did wrong and then try to come back and dominate the race.

For a moment let’s just sit back and adore the talent pool available in the midfield. We have a four-time World Champion in Sebastian Vettel, a two-time World Champion in Fernando Alonso, race winners in Daniel Ricciardo, Pierre Gasly, and Charles Leclerc. In a sport that has been famously plagued with the emergence of too many pay drivers, this has to be one of the most competitive grids in the history of the sport.

To add to this, these drivers will battle it out against each other in similarly paced cars every race. The Formula 1 season does become more attractive when there is a fight at the front. But one should not discredit the level of competition that is on display here. In many ways, this is the best midfield in the history of the sport and the Bahrain Grand Prix was just the beginning.

#5 Alpine F1 was the disappointment of the week

Action needs to be taken and fast at Alpine. The team that apparently got rid of Cyril Abiteboul when they finished fifth in 2020 and not third are at best, the seventh-fastest team in Formula 1. Fernando Alonso tumbled down the order today after starting eighth in the race. The team has been conspicuously quiet about the performance of the car throughout the pre-season but what we can see right now is that the car just doesn’t have the pace to make any real impact.

On the other hand, the team is not even up to the mark strategically. It didn’t make any sense for the team to opt for Soft tires for Ocon’s first stint. In a race where it did appear that Ocon could have snagged a point or two by using an alternative strategy, he was forced to execute the worst possible strategy out of the whole grid.

Alpine should act fast right now because despite news of long-term commitment in Formula 1, a further slide in the pecking order will not go down well and we could see some heads rolling at the end of the year. 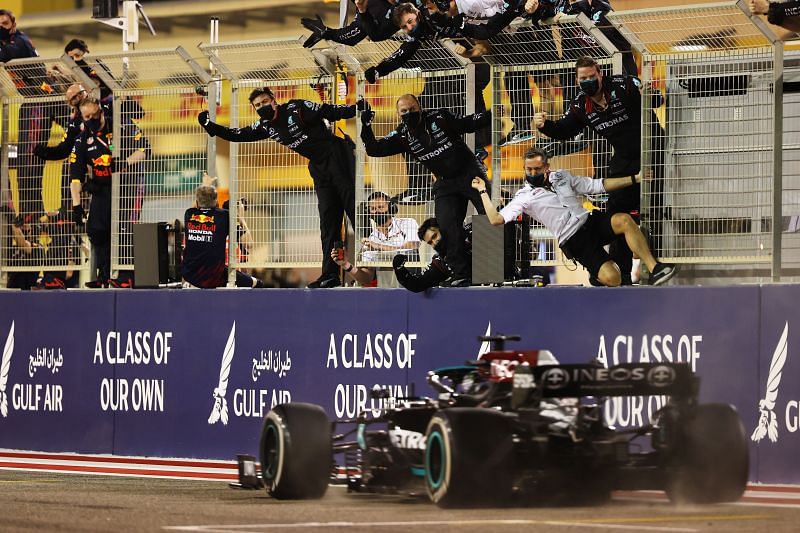