Martin Truex has drawn first blood in the round of 16,after overcoming a early pit-road penalty, Truex was caught speeding during the stage one and was forced to serve a pass-through penalty. Truex managed to stay on the lead lap and had the speed to work his way back to the front. Truex had finally managed to close the deal,after a couple of very close calls over the past handful of weeks,so this victory indeed must have been very gratifying.The victory automatically books him through to the next round.

“Last week was last week,” Truex said. “We got over it by Monday or Tuesday and focused on Chicago.

“We’re just trying to move forward and look forward each and every week and race one race at a time.”

Chase Elliott finished second, followed by Kevin Harvick, Denny Hamlin, Kyle Larson and Brad Keselowski. Logano was the only driver to finish in the top 10 who is not part of the 16-driver playoff field.

Truexs main competition looked to have come from Kyle Busch, who led 85 of the first 87 laps. However Busch had to pit under green for a loose wheel and the problems mounted,as he needed to serve a penalty for the gas man going over the wall too soon, in the end it cost Busch two laps and he never got back on the lead lap.Joe Gibbs had decided to swap the pit crews of Kyle Busch and Daniel Suarez for the Chase,it remands to be seen if that gamble will ultimately pay dividends.

“It was piss-poor execution all-around,” Busch crew chief Adam Stevens said. “When you make back-to-back mistakes, it’s tough to recover from. … It was a company decision to make the change that we made, and I wouldn’t expect that to change.

“I’m confident we made the right one. It’s just a bad day.”

Problems among the Chase field also included Ricky Stenhouse,who was the first playoff driver to run into trouble Sunday. He managed to clip the wall on lap 30 and then had a commitment-line violation, forcing him to pit twice. He lost two laps.

Until than, we recommend you to visit and read about Motos & ATVs on our friends’ website Young Choppers. 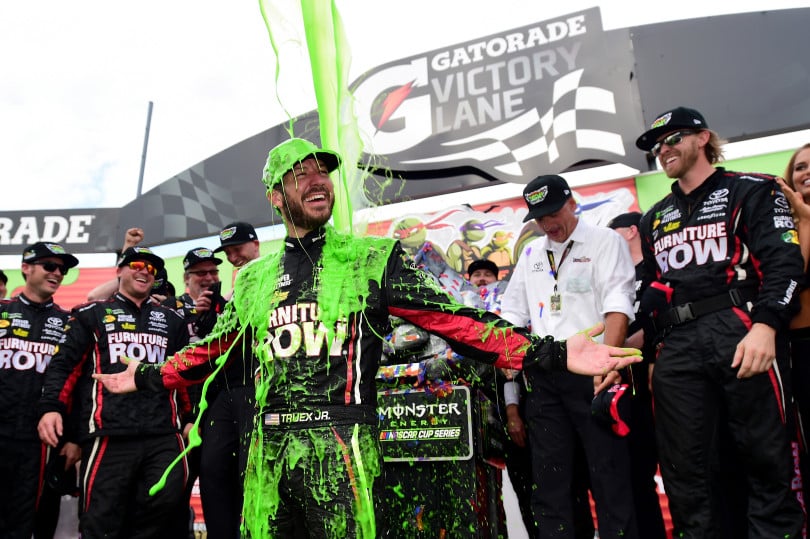