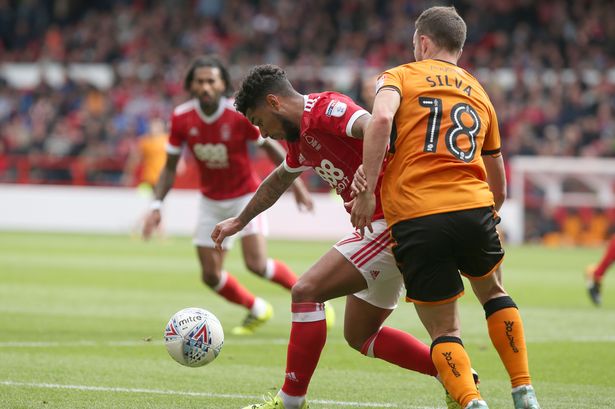 Nottingham Forest lost their second consecutive home game, this time at the hands of promotion challengers Wolverhampton Wanderers. The 2-1 win for the visitors lifts them up to second in the league, behind Leeds only on goal difference. Mark Warburton played a 4-2-3-1 formation, with Daryl Murphy being the lone striker yet again.

The game was lively right from the off, with Daryl Murphy testing Wolves’ keeper John Ruddy, before Ivan Cavaleiro forced Jordan Smith into an equally good save. Kieran Dowell tried his luck with 2 good efforts that were well saved by John Ruddy. Jota put the ball over the bar after a ball threaded through by Cavaleiro and Leo Bonatini’s shot was deflected over the bar which brought a close to an entertaining first half of football.

Wolves took the lead just 2 minutes into the second half, when Jota slid home from an Ivan Cavaleiro cross. Liam Bridcutt shot straight into the keeper’s arms before Ben Marshall let Nottingham Forest off lightly when he shot straight at the keeper, with the whole goal at his mercy. Substitute Mustapha Carayol got Forest back onto level terms 15 minutes from time when he spotted John Ruddy off of his line and lashed the ball into the centre of the net from 30 yards out. Forest were level for only 6 minutes when Jota put the visitors back infront with a cool finish beyond Jordan Smith to win the game.