Italian giants Juventus have been knocked out of this year’s UEFA Champions League, after defeat away to Benfica in Portugal, in what was a vital night in the group stage.

Dinamo Zagreb, FC Copenhagen and Maccabi Haifa all join the Old Lady in exiting the competition, with the latter having seven put past them by French side PSG.

Two world-class goals by Chelsea helped them to victory against RB Salzburg in Austria, a result which meant they progressed to the group stage of the Champions League.

Mateo Kovacic put the English side ahead in the 23rd minute. He volleyed into the top corner with an impressive effort, to give Chelsea a first-half lead.

It was 0-1 at half-time, however Salzburg found an equaliser three minutes into the second half.

A perfect cross by Maximilian Wöber found Chukwubuike Adamu in the centre, who placed a shot into the bottom corner, to bring the Austrians level.

Despite Salzburg’s efforts, Chelsea went on to find a winner in the 64th minute.

Kai Havertz was the man to claim all three points for the Blues, after curling a shot into the top corner from outside the box.

Chelsea would see the game out, to progress to the knockout stages.

In the other game in Group E, AC Milan eased past Dinamo Zagreb 0-4 in Croatia, to need just a point from their last group game against Salzburg.

Matteo Gabbia opened the scoring for Milan in the 39th minute to give Milan a half-time lead.

It was 0-2 four minutes into the second half after Rafael Leao opened his UCL scoring with his first goal in this year’s competition.

An Oliver Giroud penalty and Robert Ljubicic’s own goal completed the scoring for Milan, who go into pole position to claim second place in Group E.

Zagreb remains bottom, and are now eliminated from the competition, however can still secure Europa League football, if Salzburg fails to beat Milan.

German side RB Leipzig survived a late scare to grab a massive victory over Real Madrid, which takes them to within one point of qualification for the knockout stages.

Two goals in the space of five minutes from Josko Gvardiol and Christopher Nkunku gave Leipzig a 2-0 lead inside 20 minutes.

Real Madrid, who have already qualified, got a goal back just before halftime, with Vinicius Junior giving the Champions a lifeline in Germany.

In an impressive display by Marco Rose’s men, Leipzig reclaimed their two-goal advantage, after Timo Werner got his name on the scoresheet with just nine minutes left to play.

Madrid scored late on through Rodrygo in additional time from the spot, however it wouldn’t be enough to change the outcome.

That’s Real Madrid’s first loss of the UCL campaign, with the Spanish side already qualified.

Leipzig are now in a strong position in second place, and are now three points clear of Shakhtar Donetsk.

The Ukrainian side could only draw against Scottish Champions Celtic, with the Hoops already out of the competition, however the draw means they also can’t qualify for the Europa League knockout stages this season.

However, Donetsk equalised in the 58th minute, through rising star Mykhaylo Mudryk, who found his fifth goal contribution in this season’s competition.

Shakhtar couldn’t go on to find a winner and will go head to head with Leipzig in need of a win to qualify for the knockout stages.

Group G: Dortmund see out a vital point against Man City to qualify

Borussia Dortmund played out a stalemate with English champions Manchester City, to progress to the knockout stages.

Former Dortmund star Erling Braut Haaland failed to make an impact at Signal Iduna Park, coming off at halftime with an injury.

Dortmund, who have already gone further than they did last year after dropping into the Europa League last time out, were lucky they didn’t concede in the 58th minute after Riyad Mahrez missed yet another penalty for Man City, who have a concerning record of missed penalties.

The home side would see out the draw however, taking them with City into the knockout stages.

Dortmund’s result meant Sevilla drop into the Europa League knockout stages, despite a 3-0 victory at home to already-eliminated FC Copenhagen.

Youssef En-Nesyri, Isco and Gonzalo Montiel all scored in the second half, to secure the win for Sevilla over the Danish side Copenhagen, who had Davit Khocholava sent off with seconds remaining to add to their woes.

In a dramatic game in Group H, Benfica qualified for the knockout stages of the UCL, whilst knocking out Juventus in a thrilling game in Portugal.

Benfica went ahead through 18-year-old Antonio Silva with 17 minutes played.

The young defender got on the end of a cross by Enzo Fernandez, to head home his first goal for the club.

Moise Kean equalised for Juventus, after tapping home on the line, to bring Juve level in the 21st minute.

However, Benfica hit back and were 3-1 up by the break.

Juan Cuadrado was adjudged to have handled in the area by referee Srdjan Jovanovic, giving Joao Mario the chance to put the home side back in front.

The midfielder made no mistake, sending Wojciech Szczesny the wrong way, to give Benfica the lead seven minutes after the Italians equalised.

Rafa Silva gave the hosts a two-goal advantage, after a clever finish from a low cross by Mario found the back of the net, to give Benfica a 3-1 lead going into the break.

Silva bagged a brace in the 50th minute to extend Benfica’s lead.

A perfect chip over Szczesny put the hosts 4-1 up, giving Juve a hill to climb to stay in the competition.

Juventus substitute Samuel Iling-Junior made the perfect impact for the away side.

The Englishman put in a perfect cross for Arkadiusz Milik, who volleyed home to give Juve some hope with 13 minutes left to play.

Just two minutes later, Weston McKennie fired home inside the box to give Juve a third, in what would ultimately be a consolation for Juve, who left it too late.

The Italian side were simply not good enough in this season’s UCL and will need to ensure they at least go into the Europa League when they face PSG at home next week.

Benfica qualify for the knockout stages, joining PSG, who put seven past Maccabi Haifa in Paris, to knock out the Israeli side.

Braces from Lionel Messi and Kylian Mbappe helped PSG along the way.

Neymar and Carlos Soler also scored in another rout for the French side.

A Sean Goldberg own goal added to Haifa’s misery, who had Abdoulaye Seck to thank to at least give their fans something to cheer about, scoring a brace at the Parc des Princes.

Maccabi will now battle it out with Juventus in the last game day for a place in the Europa League knockout stage, with the Israeli side needing a result against Benfica at home.

For more on all Football and continued Champions League coverage each week, check out the Football section of the World in Sport website here: https://worldinsport.com/category/news/football/ 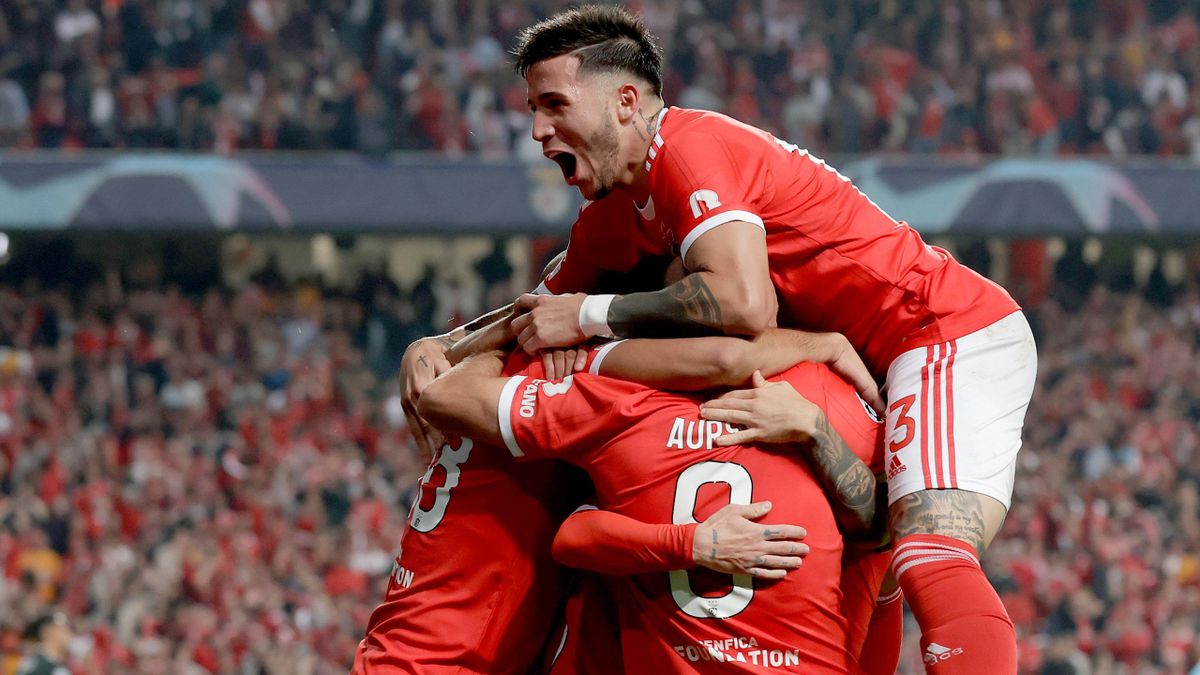