Skip to content
You are here
Home > US Sports > Nascar > Kyle Busch matches Harvick’s three straight wins on the year. 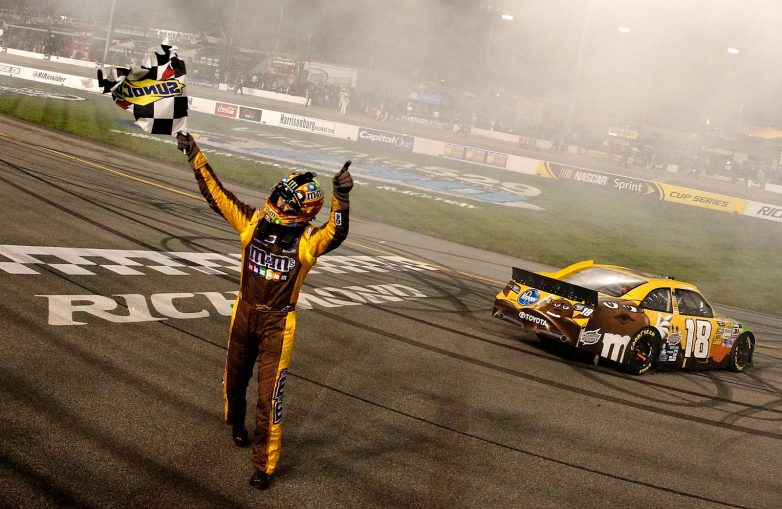 Kyle Busch raced to his third straight victory. Starting 32nd but eventually working his way into the thick of the lead pack, outrunning Chase Elliott and Denny Hamlin for his fifth career victory at Richmond.

This victory is Kyle Busch’s 46th career Cup win and came from the deepest starting position in his career to this date. Busch has the advantage over Harvick when it comes to points in the playoff, a points penalty after his Las Vegas win erased his playoff points from that race.

“It was the 10-year anniversary of you know what,” Busch explained, and he could see fans wearing his gear.

The day looked quite bright for Penske’s Joey Logano, who swept stage one and stage two. Unfortunately for Logano, it just wasn’t his day,as he couldn’t finish the deal and pick up that win, he did however finish the race with a top-five finish. Martin Truex Jr. had a tough day after leading a race-high 121 laps. Truex was very close to winning his first race at a short track race,although as luck would have it,a long pit stop ruined his opportunity.

A number of cautions in the final laps and a late race charge by Elliott,put himself in a solid position to become the runner-up at Richmond. Elliot secured his fourth top-10 finish of 2018.

Johnson started the race on a sour note,falling backward,and hitting the outside wall in the first stage and eventually going a lap down to leader Logano.Johnson was stagnant until the final stage not moving forward at all until caution flags started flying for on-track incidents. Johnson steadily picked positions,and finishing a very respectable sixth.

“For whatever reason we’ve had a really tough time getting going at the start of races with the tires we’ve qualified with,” Johnson said of his struggles. “That was today. As soon as we got those tires off, we were a very competitive car and was able to stay on the lead lap.

“With the long green flag runs, still stay on the lead lap and work our way up through the field and then finally at the end got back on the lead lap. I don’t know what we’re missing on scuffed tires, but it’s something we’ve got to figure out.”

Are next race on the Cup schedule is one of the most unpredictable,Talledega Superspeedway.

has published a new mt_pp."nizzlkicks"
24 hours ago

has just registered!
24 hours ago