Joey Logano won the FireKeepers 400 at Michigan International Speedway on Sunday, dominating the rest of the field on a day that did not go well for many top contenders.After Denny Hamlin blew a left rear tire with 12 laps to go,which set up a restart.Logano chose the outside lane, and eventual third-place finisher Kyle Larson tried to push Elliott past Logano into the lead, but to no avail. Logano pulled away, maintained an advantage of nearly one second and won the race by .889 seconds over Elliott.

He managed to lead 138 of 200 lap and controlled a number of restarts, except for one instance on Lap 117 when race runner-up Chase Elliot grabbed the lead from Logano.It was his first victory of 2016, his 15th in Cup races and likely helped him clinch a spot in the NASCAR’s Chase for the Sprint Cup playoffs. Winning at Michigan is always a big deal for Ford Racing,as they’ve had a rich winning history at the illustrious track,this  victory just adds to the legacy.

Going into Turn 1 at the start of the race, Logano said: “I thought I was King Kong. I drove down in there and about crashed. That didn’t work out so well. So I learned a lot from that one.

Kyle Larson failed post race inspection. Any penalties against Larson, said a NASCAR spokesman, would be discussed later in the week, so his third-place finish stands and is unlikely to be altered.

“Restarts for sure were pretty crazy there,” said Larson, 23, who posted his second top-10 finish in six races at Michigan. “At the start of the race, it looked like everybody was trying to take it easy but still sliding around, and we were able to gain a few spots there. I don’t think I ran out of the top six pretty much all race long.

Brad Keselowski,Kevin Harvick,Carl Edwards,Tony Stewart,Austin Dillon,Jamie McMurray and Kurt Busch rounded out the top ten on the day.Dale Earnhardt Jr., who finished 39th out of 40, is the only winner from 2015 that is winless this year.Kyle Busch slump continued on Sunday,as his Toyota Camry caught fire on the backstretch of Lap 54,after the engine blew up, losing oil that ignited. Busch managed to douse the fire with onboard fire extinguishers, afterwards taking his car to the garage for repairs.

“I had a 30-lap warning it was coming,” Busch told Fox Sports 1. “It was shaking real bad and going south for a while and building its own heat.”

Busch came into Sunday’s race having finished 30th at Dover, 33rd at Charlotte and 31st at Pocono 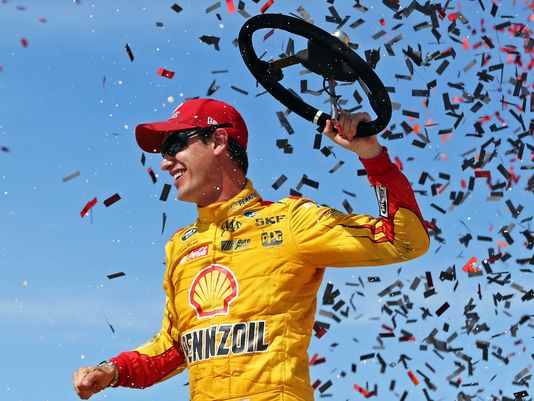