The latest round of Premier League fixtures came to an end on Monday evening with two games in London, one from the East End and the other from the Kings Road in the South West, so let’s see how those games went…

The Hammers knew if they won this contest against the leagues bottom side then they would go above Liverpool and into the top four for a couple of hours at least, and they would have fancied their chances against a Blades side who had lost fifteen of their twenty-three games this season. But the visitors have managed to pick up a couple of wins in the division recently and reached the FA Cup Quarterfinals in midweek, albeit against lower league opposition, but they would be a tough nut to crack no doubt as they needed the points desperately to try and mount a miracle charge towards safety.

It didn’t take VAR long to get involved in this contest as with less than five minutes on the clock a Declan Rice free-kick was saved by Aaron Ramsdale and the loose ball saw Craig Dawson run onto it and was then brought down inside the box and referee Simon Hooper pointed to the spot, but VAR ruled that Dawson was in an offside position when the free-kick was struck, so the decision was overturned and offside was given, frustrating for the hosts but relief for the visitors. Five minutes before half time though the visitors shot themselves in the foot when Oli Norwood played a sloppy pass across midfield, and the hosts pounced through Manuel Lanzini, Jesse Lingard and Jarrod Bowen who combined to burst forward and see Lingard eventually played in by Bowen before being wiped out by Chris Basham, no doubts about the penalty this time, and Rice stepped up and converted their first spot-kick of the season remarkably.

Chris Wilder would have been frustrated as his side had done pretty well in the opening forty-five minutes, but they had been punished for a mistake which should never have been made, and they now had to try and come from behind in this one. The Blades started the second half well and saw a deflected David McGoldrick header brilliantly tipped over, and then just before the hour mark West Ham doubled their lead when Issa Diop sent a lovely downward header into the far corner after Aaron Cresswell had swung in a corner from the left, and The Hammers now had a two-goal cushion, with the Blades scratching their heads wondering how they were two behind in this one, they should have been level moments before but paid the price for not taking that chance.

It just had not been their night, and things got worse for them when defender John Egan was stretchered off in a leg brace after blocking a Lingard effort, and then deep into stoppage time West Ham added a third after Ryan Fredericks cut inside and fired inside the near post with no defender trying to close him down, it had been that type of season for the visitors, and this game had summed it up. Plenty of attacking moments but no cutting edge, and silly errors/moments of lack of concentration which had cost them dear, and no points to show for their efforts, it looks bleak for them now.  For West Ham, though it was job done in the end, and up to fourth place ahead of the Chelsea game and above last season’s champions in the table, what a job David Moyes has done this term, astonishing stuff.

The Blues are on a run of three successive wins and have only conceded one goal in that time, and they knew if they could defeat The Geordies at Stamford Bridge, they would end the weekend in the top four and only four points off second place. Newcastle though stood in their way and Steve Bruce’s men had won two of their last three games to give themselves some breathing space down at the bottom, so Chelsea would have to be wary of their opponents in this one, although the loss of Callum Wilson to injury was a big blow for the Toon.

There was a surprise in goal for Chelsea with Kepa replacing Edouard Mendy between the sticks for a Premier League game, Kepa has been playing in the FA Cup games this season but Thomas Tuchel had picked him for this league contest, which raised a few eyebrows before kick-off, this would be his first Premier League appearance since 17th October when The Blues drew 3-3 against Southampton.

There was an early blow for the hosts when Tammy Abraham limped off injured after twisting an ankle following a goal-saving challenge from Jamaal Lascelles, meaning he had to be replaced by Oliver Giroud, but it was Giroud who was to put Chelsea ahead on the half-hour mark when brilliant play down the left from Timo Werner saw him drive to the byline and cross into the six-yard box, and although Karl Darlow pushed the ball out, it went straight to the French striker who fired back past him into the open net. And seven minutes before the break Chelsea doubled their lead, and Werner had finally ended his goal drought after netting his first goal since November 7th as a Mason Mount corner came off the back of Newcastle defender Lascelles towards the back post where the German striker got his foot to it and see the ball go over the line before Darlow could claw it out, it was a messy goal but Werner was delighted and so was the Blues, they were in total control of this contest.

Newcastle did give it a go in the second half although lacked that cutting edge, although this may have been down to the fact Chelsea took their foot of the gas second half who themselves did have openings to add a third and seal this one, but in the end it was a fairly comfortable three points for The Blues and a fourth straight win, taking them into fourth and above the Hammers on goal difference. For Newcastle, it’s zero points from this one and they will now nervously look over their shoulders at Fulham who plays twice more before they play again, against Burnley and then Sheffield United, win those both and The Cottagers would only be a point behind Newcastle when The Magpies next play…

Let’s have a look at the table, shall we… 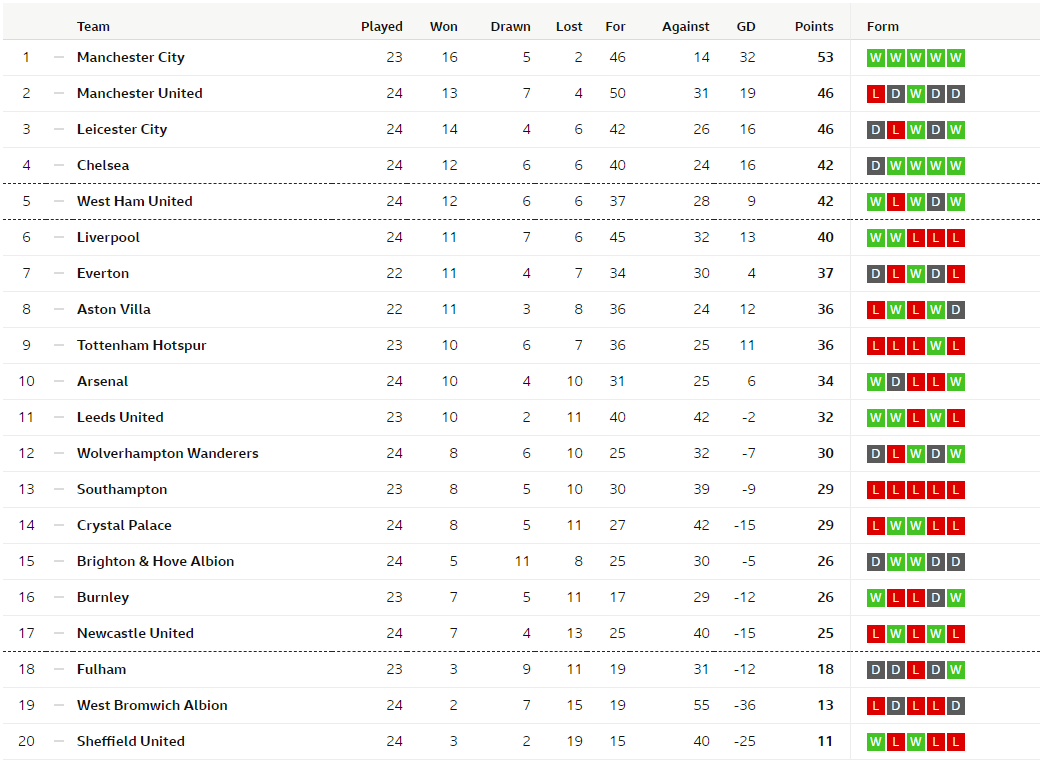 Wins for Chelsea and West Ham see them leapfrog Liverpool in the table, the current champions are now down in sixth, and as said above Fulham could really put some pressure on the ones just above the bottom three in the next week, could become an interesting battle for that last relegation spot who knows, what is looking likely is the bottom two’s fate, looking like a miracle is needed for those two to stay up now.

There are two fixtures in the Premier League in mid-week, both taking place on Wednesday…

Huge week for Fulham, a win over Burnley will mean they would only be four points from safety, and with their game after that being against Sheffield United, a win in that one could see them right back in the survival fight, Burnley though will be tough and if they win then they can breathe much easier. And how will Everton respond to that poor showing against Fulham against a City side who are going for SEVENTEEN straight wins in all competitions? If City does win then they would open up a ten-point lead at the top which you would find hard to see them relinquishing with only fourteen games to go after this. 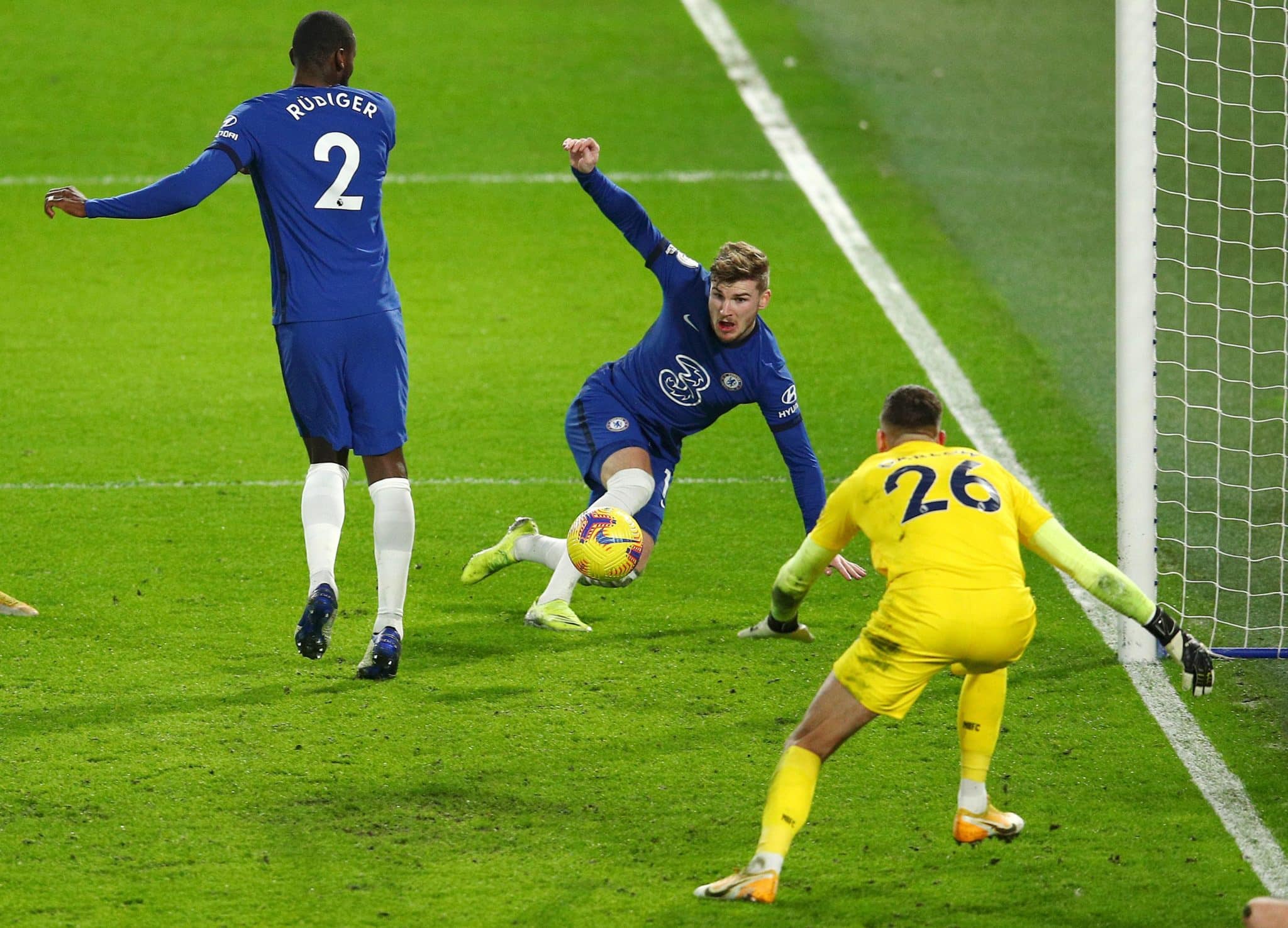