Marlon “Chito” Vera is known for getting off to slow starts and then gaining momentum as the rounds progress. Tonight, after allowing former bantamweight champion Dominick Cruz to have some impressive moments, Vera finally took matters into his own hands and ended the fight in spectacular fashion. The night also included memorable performances from Nate “The Train” Landwehr and Gerald Meerschaert. There’s a lot to unpack here; without further ado, let’s get into it!

Dominick Cruz was on a mission to prove that age and an extended layoff have not robbed him of his skills. In the first thirty seconds of his fight against Marlon Vera tonight, Cruz reigned down on his opponent with a barrage of punches that made an impact but left Vera unphased. This was a strategy that Vera seemed prepared for and he handled it well. Within the first minute and a half of the fight, Vera had responded with a big left hook that sent Cruz to the mat and put him on notice that this would not be an easy fight and Vera would not be intimidated.

Round two was a seesaw battle; both men relied on striking but neither man was able to take control of the action. In round three, Vera executed a beautiful right handed double-jab that sent Cruz crashing to the mat. Although Cruz got back to his feet rather quickly, it was this moment that altered the momentum of the fight. Early in round four, Vera executed a left-legged high kick; the maneuver landed directly on Cruz’s nose and knocked him out instantly. Just like that, a back-and-forth affair was turned into an impressive knockout victory!

Marlon Vera has to be one of the most patient fighters in all of mixed martial arts. Although Dominick Cruz is a legend in the bantamweight division, Vera never seemed intimidated and he seemed to know his game plan all along. At 37-years-old, Cruz was not able to maintain the momentum he displayed in the opening round. Vera’s determination to stick to his game plan worked. This should serve as a lesson to all young fighters; never let your opponent rattle you. The willingness to make adjustments is important, but the discipline to trust your training is equally essential.

ALSO READ:  Paddy ‘The Baddy’ Pimblett – The future of the UFC
Embed from Getty Images

Featherweight prospects Nate “The Train” Landwehr and David Onama put on an exciting fight full of action, suspense and drama. Landwehr’s ability to play to the crowd is intoxicating. His interaction with the audience is reminiscent of Sean O’Malley and his personality will earn him a spot on pay-per-view events in the not-so-distant future.

In round one, Onama sent Landwehr crashing to the mat with a smashing left hand early in the period. Although Landwehr fought to his feet, Onama was able to respond with an emphatic body slam. However, Landwehr would not be discouraged; he executed a well-timed body spin and gained the dominant position. Afterwards he began pummeling Onama with elbows. Onama was able to survive the round but both men had put the other on notice that they were in for a fight.

Early in round two, Landwehr was able to score two takedowns, followed by a failed attempt at an anaconda chokehold. Although Onama avoided the submission, Landwehr’s superior activity level led to absolute dominance throughout the round. The first two and a half minutes of round three was an action packed battle; both men abandoned defense and went on full offensive attack mode. Landwehr attempted a takedown in the second half of the round but Onama was able to avoid it. Eventually Landwehr took his opponent to the mat, only for Onama to break free and end the round with an impressive flurry of punches. Landwehr was awarded the unanimous decision victory, but both of these athletes deserve a round of applause for putting on such an entertaining fight.

Women’s strawweight prospects Yazmin Jauregui and Iasmin Lucindo are two of the youngest athletes on the UFC’s roster. Jauregui is 23-years-old, while Lucindo is merely 20. This was a very close fight. Lucindo had the more diverse offensive weapons, but Jauregui had a more sophisticated defensive front. Ultimately, Jauregui’s ability to block all of Lucindo’s kicks and avoid all of her takedown attempts resonated with the judges. Although the striking between the two women was close to equal, Jauregui was awarded the unanimous decision. Each of these athletes have a bright future and are two prospects to keep an eye on in the women’s strawweight division.

Women’s bantamweight prospect Priscilla Cachoeira put on a blistering display of power against her opponent, Ariane Lipski. She set the tone early by responding to the opening bell with a flurry of punches. In the midst of the striking barrage, a right hook by Cachoeira landed on Lipski’s chin, sending her crumpling to the mat. Cachoeira pounced on Lipski and began pummeling her with punches, rendering her defenseless and causing her to cover her head to stop the blows. The referee mercifully stopped the fight. Priscilla Cachoeira is a name to remember and a rising star to watch out for.

After making good use of calf kicks in the early moments of round one, light heavyweight prospect Devin Clark was stunned by a left jab from his opponent, Azamat Murzakanov. After Clark responded with a beautiful high kick that landed on his opponent’s head, Murzakanov was able to respond by controlling the round with a right-handed jab. His ability to be ambidextrous was impressive.

Early in round two Clark stunned Murzakanov with a left hook that looked like it might just end the fight. However, instead of going for the finish, Murzakanov attempted a takedown. Clark was able to avoid the takedown, and at the same time regather his senses. Somehow Clark survived round three, but the psychological damage had been done. Murzakanov hit Clark with a left jab that landed on the left side of Clark’s rib cage and made him crumple to the mat in pain. He then began pummeling Clark with punches until the referee finally stopped the fight. The light heavyweight division is already loaded with talent; add the name Azamat Murzakanov to the list of worthy contenders.

Middleweight challengers Bruno Silva and Gerald Meerschaert started the first round of their bout as if it were a bozing match. Each man tried to out-strike the other but neither was able to inflict significant damage on their opponent. Eventually, Silva began utilizing a mixture of high kicks and calf kicks, and was able to experience limited success. Meerschaert executed a textbook level change with a little under two minutes left in the round. He used ground control for the remainder of the period to gain the early lead in the fight.

In round two, Silva began to overreact to the fact that he’d been out-pointed in the opening period. He started to throw wild looping punches, many of which did not land and only succeeded in draining him of his energy. He also began to switch between a southpaw stance and an orthodox stance. If used correctly, this strategy could confuse an opponent. However, Silva switched with enough frequency to rob himself of any momentum and to render himself ineffective.

Eventually, Meerschaert took advantage of Silva’s fatigue. He landed a huge overhand right that sent Silva to the mat, landing on his knees. Meerschaert then established a front facing guillotine chokehold, forcing Silva to tap out. It was a dramatic turn of events and an impressive victory for Meerschaert.

Although there are no moral victories in sports, there are some instances where the loser of the contest was still able to gain something from the performance. David Onama and Iasmin Lucindo are two examples of this from tonight’s main card. While Nate Landwehr and Yazmin Jauregui certainly earned their victories, Onama and Lucindo performed well enough to etch their names into the memory of upper management. Ultimately, due to tonight’s performances, they will be given more opportunities to perform in front of sold out crowds and at major events. It just goes to show that hard work always pays off, even for the athlete who didn’t get the desired outcome.

The UFC returns next weekend with UFC 278 from Salt Lake City Utah. The main event of the evening will feature reigning welterweight champion Kamaru Usman fighting Leon Edwards for the second time of his career. The first time they met, back in 2015, Usman was not a champion; there’s a lot more at stake this time around. As always, we’ll have all the latest updates about the outcomes of the fights, as well as in depth analysis available right here at World in Sport! 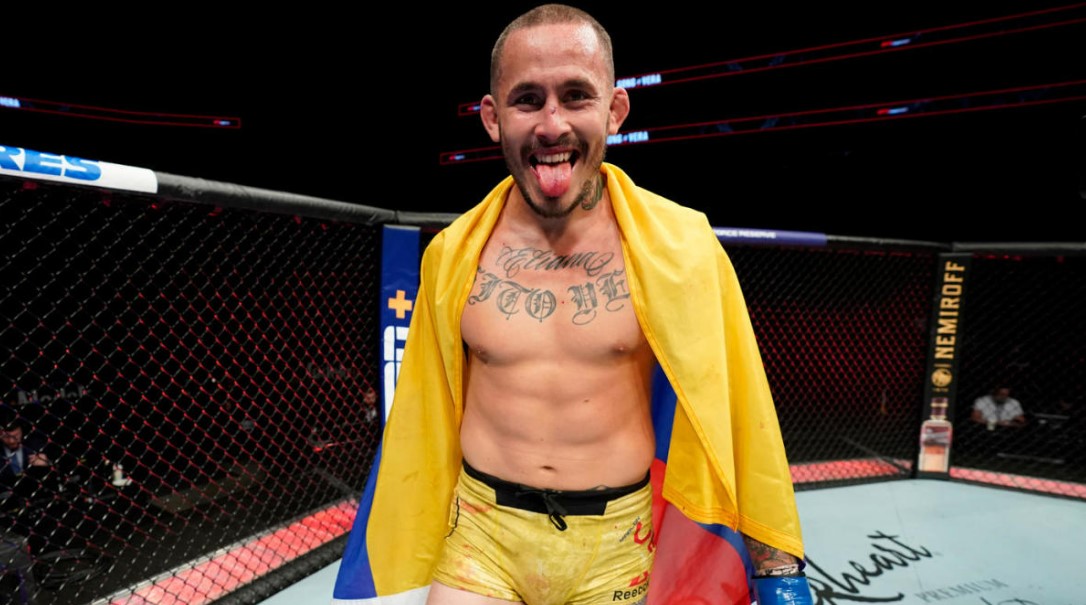