How has the tournament unfolded and did Australia deserve World Cup glory?

I can pretend that I’m proud of what was achieved by the English Cricket Team at the T20 World Cup, but ultimately I am disappointed. Such is their dominance in the shorter formats, I can only blame the players for being so magnificent at bowling with and clobbering the white cherry that I have grown to have even a modicum of expectation when we walk in a global tournament. A truly unique commodity as a fan of English Sport.

Alas, they were rendered bridesmaids and had to stand aside and watch as the Southern Hemisphere battled it out for the gold and the glory. Could it not have been someone else other than the old enemy?! Yet, with all that went by over the last month, has the tournament found itself a worthy winner and has it been a resounding success?

Resounding is a strong phrase and few with an opinion will express such joy when reflecting on this predictable tournament.

Has there been a time in recent memory when the toss has proved quite so crucial on such a regular basis? It rekindles me of the sopping wet English summer of 2012, in which almost every game of the Worcestershire League Division two hung on the toss of a coin. In contrast to my club’s fortunes that season, often in this tournament the coin fell the right way for England fans. However, on a global scale, great frustration can be felt by all, with over 66% of games being won on the toss. More than in any other ICC Tournament to date.

Although I stand by that statistic, in no way am I suggesting that the quality of cricket being played was not at a high level. In fact, some players truly excelled themselves as runs were plundered left right and centre. It was not as high scoring as the IPL is capable of being, but bat definitely had the monopoly over ball throughout.

Bowlers had to be a level above in order to restrict the free-flowing openers from almost every side, only a few were unable to capitalise on the helpful conditions.

Which segues nicely into the most disappointing side of the tournament. The Bangladesh Cricket team has progressed far in recent years, further even than Leeds United have under the tutelage of Marcelo Bielsa. In the last year, they have welcomed to their shores and beaten the two finalists from this competition, Australia and New Zealand, 4-1 and 3-2 respectively. In conditions that are not only similar to those in the UAE but were exceptionally alien to the majority of other sides.

In white-ball cricket, they have become a force to be duly considered and for them to go winless throughout the Super 12 stage was a poor reflection on their actual capabilities. Taking Afghanistan for example, and although the Afghans had an easier group, it was not until their final fixture that they were ruled out of semi-final contention.

In contrast, Bangladesh lost their first three and then played and capitulated in two dead rubber games before hopping on their short flight back to the homeland. They should have provided a sterner test for the sides in their group and I’m sure they will be deflated by their poor showing, especially after causing a couple of upsets at the 2019 One Day World Cup.

The overachievers were Afghanistan, but I’ve already mentioned them so I wish to speak of Pakistan before moving on. They were incredible from start to finish and it took an individual piece of brilliance (I find that extremely hard to write) that finally took them down. They have forged one of the most eclectic and dangerous T20 teams in the world, boasting almost every bowling option available, two world-class opening batsman, a strong and destructive middle order and the surprise package of the tournament Asif Ali who provides unparalleled finishing ability. Ice truly does run through his veins.

With that being said, the UAE has been their de facto home for the last 6-7 years and therefore, with the team that they have, should certainly have made the Final at least if not go one better. Their lust for revenge and restitution will be palpable come to the next T20 World Cup. I will have them as favourites unless there is a great change between now and then.

Now, to Australia. Victors, but are they worthy winners? If taking nothing but the final into consideration then most certainly. After conceding a beyond competitive total, they made more than light work of New Zealand’s supreme bowling attack that crumbled under the pressure.

However, Australia had a tumultuous journey to the final and it seemed that they would crash out long before their last group game. The hopes of that proved to be premature as they managed to cancel South Africa out with a superior run rate.

In their semi-final, they inflicted the first loss in the UAE in five years on the soaring Pakistani’s who looked for all money to have won the game. It took the skills and courage of a bull terrier with a moustache to smash Australia over the line.

With that innings and specifically the partnership between Wade and Stoinis, the Aussies made a clear statement exhibiting their tremendous resolve and tenacity. So much so that when the coin came down on their side in the final, I had succumbed to the likelihood, if not the guarantee, that the trophy would be lifted by green and gold.

Now I know that journalists, pundits, commentators etc, need to be impartial, but I must keep the upcoming Ashes in mind when it comes to pouring praise over the Aussies. So, you must understand that it pains me to say that Australia played some exceptional cricket towards the end of that tournament and were extremely worthy winners of their first T20 title.

New Zealand however, I expected so much more. The people’s champions can hardly do more to win over the love and praise of the cricketing community, but they need to do a little more if they are to win a major white ball trophy because this marvellous crop of players has moved on.

With their victory in the World Test Championship, it seemed that the monkey was off the back. They had gone from ‘The Dark Horses’ at every tournament, to major contenders in all formats. Why then can’t they get themselves over the line in the shorter game.

Whilst discussing with a fellow ‘pundit’ and cricketing mind, we came to the conclusion that The Kiwi’s lack the bite, the real edge that it takes to perform in the big moments. I refer solely to the big moments that pass by quickly, as they do in a T20 final. With regards to the World Test Championship, there are few ‘big moments’ that will define the entire game. Essentially good cricket will prove victorious and New Zealand certainly play that.

However, in the last two World Cup finals, they batted first and had the opportunity to pile on tremendous pressure, but instead played tentatively and posted above-average but achievable totals. Their powerplay in this years final was their worst of the tournament. That is simply unacceptable when the trophy is on the line. There’s is no doubt in the ability of their bowling attack, even without star quick Lockie Ferguson, but with the added pressures surrounding the situation, all but Boult buckled under the weighing expectations.

Milne and Sodhi were particularly poor. So much so that I received a message from my dear friend around the 14th over of the Aussies innings. It read ‘Sodhi is dead to me.’ I struggled to argue the point.

So, in hindsight, it truly was quite a dreadful tournament for the neutral with not a single upset worthy of note. Namibia’s beating of Scotland is possibly the only exception. The only moment that I will reflect upon in days to come will be the massacring of Australia at the hands of the poms. I sat in my uncle’s living room, working my way through a bottle of the Spiced Opihr gin and watched as Jos Buttler scorched the helpless, mulleted Aussies around the UAE. It was a truly tremendous moment, and I reacted accordingly by gloating to my friends on the southern continent. ‘Beware the early crow’ they said. Oh my, am I eating my words now.

Congratulations go to Australia. Your victory, though bitter beyond comprehension, is well deserved. With that I have but one thing left to say. How on earth did Adam Zampa not win Man of the Tournament. He was far more influential and if not him, then Babar is also a more worthy winner. To be honest, anyone but David Warner. Literally ANYONE! 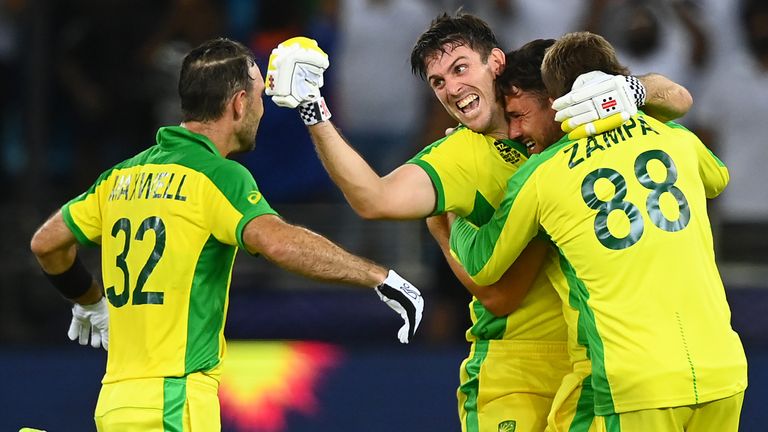